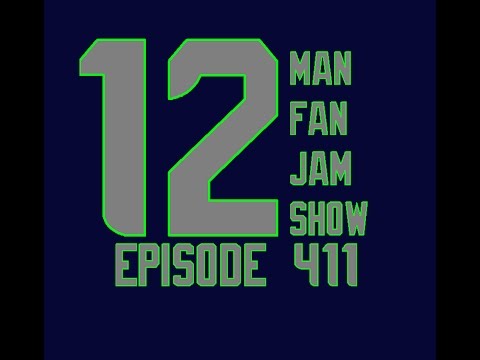 Seahawk fans are you anxiously awaiting your Seattle Seahawks to beat the New York Jets?

Why not get ready for the Seahawks/Jets game and check out the 12 Man Fan Jam Show, a show made up of Seahawk fans just like you from around the world talking Seahawk football?

In the first quarter of this episode, Moses reveals a special meetup and live show plan for episode 413 and Will reveals in his news who played in the NFL in an altered state and who put pennies to good use.

In the second quarter we recap the Seahawks victory over the 49ers and caption a Pete Carroll version of “Caption That Picture”.

At halftime, it’s another award winning version of the best Seahawk themed game that you the viewer can play along with…. It’s 12 MAN FAN JAM SHOW HALFTIME TRIVIA where Matt looks to hold on to his crown.

In the third quarter we discuss the upcoming game between your Seattle Seahawks and the New York Jets .

In the fourth quarter, we make our predictions, prognostications, and gameballs for the upcoming game between your Seahawks and the Jets. Meanwhile, Moses reveals three ways you can tell it is Autumn in New York City.

All of this plus Moses finds a football team for Amsterdam, Will reveals his favorite movie, and Dustin trash talks with Matt … Like, share, and subscribe, won’t you?