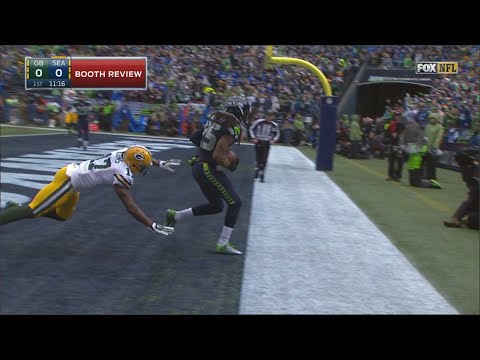 Trailing 16–0 at halftime and 19–7 with under three minutes left in the game, Russell Wilson, despite throwing four interceptions, rallied the team to 15 unanswered points and won the game on a 35-yard touchdown pass to Jermaine Kearse in overtime to become the first team to make consecutive Super Bowl appearances since the 2004 New England Patriots, and the first NFC team to make consecutive Super Bowl appearances since the 1997 Green Bay Packers. Their 16-point halftime comeback was the largest ever in a conference championship game, besting the 15 point halftime deficit by the Indianapolis Colts against the New England Patriots in 2006. This was also the second largest total comeback in a championship, the first also being the 2006 AFC Championship with Indianapolis against New England in which the Colts trailed 21–3.

Green Bay took the opening kickoff and drove to the Seattle 29-yard line, only to lose the ball when cornerback Richard Sherman made a leaping interception of an Aaron Rodgers pass in the end zone. However, Seattle fared no better, as Wilson was intercepted a few plays later by safety Ha Ha Clinton-Dix, who returned the ball 26 yards to the Seahawks’ 4-yard line before a penalty pushed the team back to the 19-yard line. Green Bay managed to reach the Seattle 1-yard line, but they failed to break the goal line with consecutive running plays, forcing them to settle for Mason Crosby’s 19-yard field goal. Then Packers linebacker Brad Jones forced a fumble from kick returner Doug Baldwin, which safety Morgan Burnett recovered on the Seahawks’ 23-yard line. The Packers again drove to the 1-yard line, but had to settle for another Crosby field goal to go up 6–0. Following a Seahawks punt, Green Bay increased their lead to 13–0 with a 7-play, 56-yard drive that ended on Rodgers’ 13-yard touchdown pass to Randall Cobb on the last play of the first quarter.

Early in the second quarter, Packers defensive back Micah Hyde returned a punt 29 yards to the Seattle 33-yard line, setting up Crosby’s third field goal that increased Green Bay’s lead to 16–0, the only score of the quarter. On the first play after the ensuing kickoff, Clinton-Dix intercepted another pass from Wilson, giving Green Bay a first down on their 44-yard line. But a few plays later, Rodgers returned the favor by throwing a pass that was intercepted by defensive back Byron Maxwell. Seattle then drove to the Packers’ 18-yard line, only to have Wilson throw an interception to Sam Shields in the end zone.

After an exchange of punts started the second half, Seattle finally got on the board with an 11-play, 78-yard drive, featuring a 29-yard completion from Wilson to Baldwin. Faced with 4th and 10 on the Packers’ 19-yard line, the Seahawks made one of the most critical plays of the game. Coach Pete Carroll sent the field goal unit onto the field, but ran a fake field goal play with punter Jon Ryan, previously utilized as the holder, taking the snap and running to the left. As he headed for the line of scrimmage, he managed to pull the entire Green Bay defense toward him, leaving rookie offensive tackle Garry Gilliam, who had checked in as an eligible receiver, wide open down the field. Ryan threw a pass just before reaching the line, which Gilliam hauled in for a touchdown, cutting the Seahawks’ deficit to 16–7.

Early in the fourth quarter, a 32-yard burst by Packers running back James Starks sparked a 57-yard drive that ended with Crosby’s 48-yard field goal, putting Green Bay up 19–7. Green Bay seemed in control of the game now, especially when Wilson threw his 4th interception of the day, this one to Burnett, giving the Packers the ball at their 43-yard line with just over 5 minutes left in regulation. However, Seattle’s defense made a crucial stand. Three carries by Eddie Lacy resulted in a tackle by Kevin Williams for a 4-yard loss, a tackle by Michael Bennett for a 2-yard loss, and a 2-yard gain. Green Bay had forced Seattle to use two timeouts, but they punted the ball back after running just 1:12 off the clock. Taking the ball back on their 31-yard line with 3:52 left, Seattle running back Marshawn Lynch started the drive with a 14-yard run. Then Wilson hooked up with Baldwin for a 20-yard completion, and later connected with Lynch for a 26-yard gain. Two plays later, Wilson scored on a 1-yard touchdown run, trimming Green Bay’s lead to 19–14.