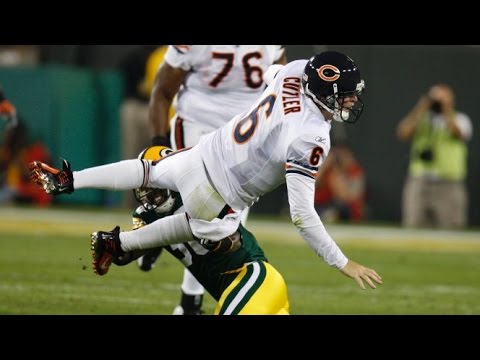 The Jay Cutler era is over in Chicago, even if the Bears won’t admit
seattle seahawks
ATS Projections for Every NFL Week 7 Matchupquarterback.” He was supposed to bring an end to the revolving door at the position for the Bears, which previously saw guys like Kyle Orton to Rex Grossman to Brian Griese start games in Chicago.
For the past eight years, Cutler has been nothing but mediocre and polarizing. His stand-off attitude and emotionless reactions on the field are traits most stars at the position don’t tote. Yet, for as bad as his image has become in Chicago, it’s not his only downfall.
His play has been unspectacular, and even bad at times, in recent years — and for most of his time in Chicago. This is a guy who owns a career mark of 205 touchdowns to 143 interceptions, a ratio that isn’t exactly something most teams would want to see from their franchise quarterback. He’s completed just 62 percent of his passes and owns a record of 67-69 in 11 seasons.
Granted, not all of those losses can be pinned on him, but his inability to win football games has become abundantly apparent in Chicago, and it’s finally time for the Bears to move on from the 33-year-old quarterback — even if they won’t admit it.
utler suffered a thumb injury in the second game of the season, landing him on the bench. It gave way to Brian Hoyer, whom the Bears just signed this offseason, as the team’s starting quarterback. Not much was expected from the journeyman when he was suddenly inserted into the starting lineup, but he’s been solid.
In fact, he’s been so solid that the Bears have little reason to turn back to Cutler when he’s fully healthy.
In his four place starts for Cutler, all Hoyer’s done is set a franchise record for the most consecutive 300-yard games, becoming the first Bears quarterback to reach the mark four times in a row. Cutler, on the other hand, has only had back-to-back 300-yard games in Chicago twice in eight years. Hoyer did it in his first four starts.
Of course, throwing for a whole bunch of yards against bad defenses isn’t the end-all be-all determinant of a quarterback’s success. Nor does it prove that Hoyer is a definitively better player than Cutler. But it does show how many squandered opportunities Cutler has had. Hoyer is also proving that the Bears’ supporting cast isn’t the problem.
He’s getting it done with guys like Cameron Meredith and Eddie Royal, opting not to lean on Alshon Jeffery too regularly. It’s not as if those players are simply making Hoyer look good, either. He’s completing 68.8 percent of his passes — third in the NFL — yet he hasn’t thrown a single interception on 189 pass attempts.
Hoyer has certainly unseated Cutler as the Bears’ starting quarterback this season, and they’d be foolish to go back to Jay for the sake of pleasing a veteran previously entrenched in the starting role. While they haven’t anointed Hoyer as the starter the rest of the way, the coaching staff knows that will be the case. The Bears aren’t winning any additional games with Hoyer in the lineup, but the offense has been incredibly more efficient under his leadership.
That doesn’t mean Hoyer is the long-term solution. He hasn’t been that with any of the six teams he’s been on, and he won’t be in Chicago, either. But what he has done is prove it’s time for the Bears to move on from Cutler and get a fresh start.
They’ve reached the postseason just once with Cutler at the helm, and even when they did make it to the playoffs, he came under fire for an injury doubted by the majority of people. Does that mean Cutler was faking the injury in the game against Green Bay in 2010?No, but it’s telling that the narrative became so strong afterwards.
So how exactly do the Bears just move on from a guy who’s been their quarterback for nearly the past decade?
Simple: cut him. It’s as easy as that.
Cutler is signed through 2020 and has an average cap hit of $18.7 million until his contract runs out. Currently, he has the 15th highest cap hit in the NFL among quarterbacks, which isn’t debilitating for Chicago, but it’s also going to rise in the next four years. Instead of paying a quarterback to perennially miss out on the playoffs and win 50 percent of his games, the Bears can easily get out of his contract