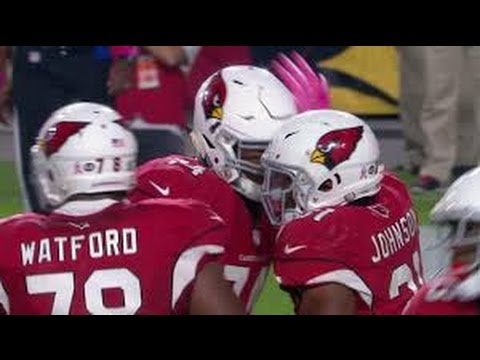 The Arizona Cardinals have won back-to-back games in primetime after defeating the New York Jets 28-3 on Monday Night Football.

In his return to the desert, Todd Bowles leaves University of Phoenix Stadium falling short against former mentor Bruce Arians.

Cardinals defense too much for Jets offense

The New York Jets offense ended most of their drives on punts. Their most effective drive of the game came in the second quarter when the Jets drove down the field and scored off of Nick Folk’s 39-yard field goal.

Ryan Fitzpatrick looked uncomfortable all night, completing 16 passes on 31 attempts for 174 yards with one interception. Geno Smith played in his first game of the season going 4/6 for 31 yards, completing four of his first five passes. He ended his first drive by throwing an interception on a fourth and eleven play, being picked off by Tyrann Mathieu.

New York had no run game to speak of, accumulating a total of just 33 yards on 14 carries. Matt Forte had the best run of the night for just eight yards. Bilal Powell saw more time in the backfield in passing situations, catching three passes for 12 yards.

Brandon Marshall had a good game, catching three passes for 70 yards, but Patrick Peterson proved to be too much, winning their head-to-head matchup. Charone Peake and Quincy Enunwa combined for eight catches for 95 yards in their effort to make plays.

Shades of the 2015 Arizona Cardinals come to life

For the past couple of weeks, shades of the 2015 Arizona Cardinals are starting to return. It became more evident throughout the game.

Carson Palmer looked good playing in his first game after his concussion, going 23/34 for 213 yards and a touchdown. Arizona also got contributions from both John and Jaron Brown, combining for 89 yards. J.J. Nelson was given the opportunity for some carries in the backfield, rushing for 23 yards on two carries. Michael Floyd caught the only touchdown pass of the night.

On defense, Arizona’s defense looked like the dominant defense we are accustomed to seeing. Since returning to his nickel corner role, Tyrann Mathieu has been very effective, racking up six tackles. D.J. Swearinger has stepped up since replacing Tyvon Branch, collecting four tackles and had an interception. Markus Golden and Chandler Jones continue to cause headaches for opposing offensive coordinators, ending up in the backfield almost every play.

For the first five weeks of the season, the Arizona Cardinals had a stigma to them because they could not score in the first quarter. The streak came to an end as running back David Johnson scored a touchdown on a 58-yard run.

Johnson finished the night with 111 yards on 22 carries and scored 2 more touchdowns. In his last two games, Johnson has rushed for 268 and five touchdowns.

The New York Jets will look to rebound next week at home against the Baltimore Ravens. One thing to watch this week is what the Jets quarterback situation will look like. Will Ryan Fitzpatrick stay under center or will Geno Smith be given another opportunity to see what he can do?

For the Arizona Cardinals, another primetime game is instore, this time with division rival Seattle Seahawks on Sunday Night Football. The Cardinals did their job saving their season, but they must carry their momentum into next week against Seattle. The two teams split the two games last season, with Arizona winning in Seattle and Seattle winning in Arizona closing out the 2015 regular season.