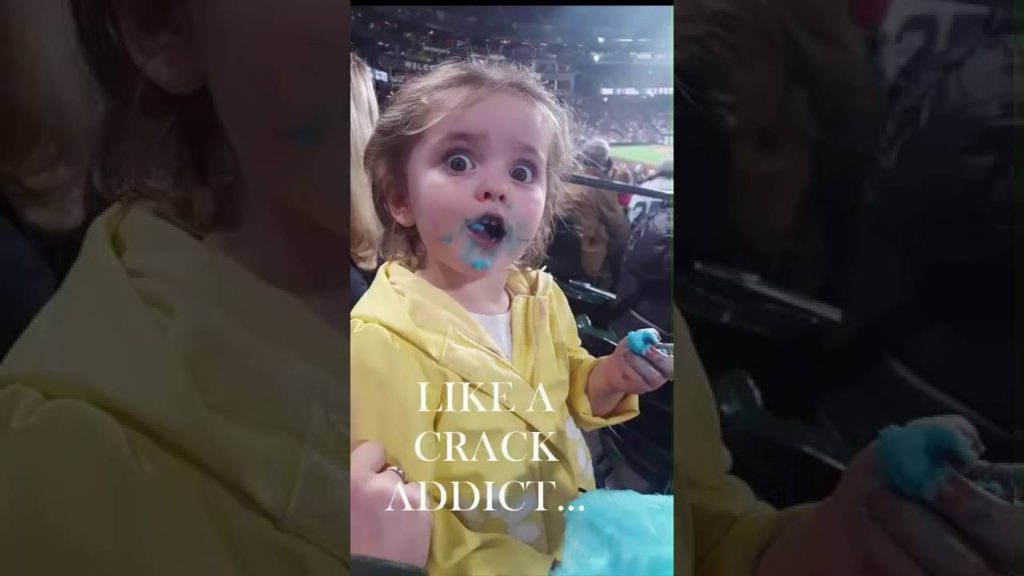 Think you’re happy? Maybe you are, but are you THIS happy?

Cotton Candy Girl, as she’s being called online, was attending the Seattle Mariners game on Wednesday night when the team showed footage of her enjoying the unnaturally blue treat.

The girl has not yet been publicly named, but proud dad Jake Hart shared the clip on Twitter. A family friend at the game, John McCallum, posted a follow-up image that revealed the Cotton Candy Girl’s enthusiasm showed no signs of fading:

Her photos and GIFs have gone viral.

“She’s literally like that at every baseball game, and we go to a lot of games,” he said. “We moved to New York now so we go to Mets games as well as Mariners games, and she’s just a huge fan,” he said. “So she’s pretty much like that at every game but last night, after (Adam) Lind hit the grand slam, everyone was pretty pumped up and they kept getting runs inning after inning. So middle of the third inning she was just sort of swept up with the frenzy with the rest of the crowd and the camera just happened to catch her being her delightful self.”

Hart doesn’t think it’s just the sugar that brought Beatrix to that level of ecstatic.

“I don’t think she was just hopped up on sugar there,” he said. “I mean she does love sugar — all little kids do when they get their daily treat. And that was her first time having cotton candy ever, so she was certainly in the middle of a pretty exciting experience as it is.

“You could say that in four seconds she seemed to experience every emotion available.

Hart said he’s still trying to process the response from his daughter’s reaction. He says they thought it was hilarious when his daughter was on the Jumbotron, but then became a little overwhelming.

“As much fun as we had last night when we woke up this morning, it was a whole different ballgame. Right now she’s been trending No. 1 at Reddit. …We’re hearing from websites and news organizations all over the country. It’s pretty crazy. I’m just happy to share our happy, fun-loving little girl with the rest of the world I guess.”

SEATTLE, WA (KTRK) — When it comes to peanuts and Cracker Jacks at the old ballgame, this little girl will pass. Three-year-old Beatrix Hart is all about the cotton candy.

This young fan became an instant social media sensation during Wednesday night’s Seattle Mariners 8-3 win over the Texas Rangers for devouring her stick of sugary goodness and delightfully bouncing around in her seat.

Her face goes from plotting world domination to complete excitement as her sugar-high kicks in. Cotton Candy Girl’s scene-stealing performance, and general adorableness, was enough to get Mariners fans on Twitter to nominate her to be named the team’s player of the game.

KOMO reports that while the honor went to Adam Lind, who hit two home runs to lead Seattle to victory, the Mariners tweeted out a bit of compromise to recognize Cotton Candy Girl’s enthusiasm.