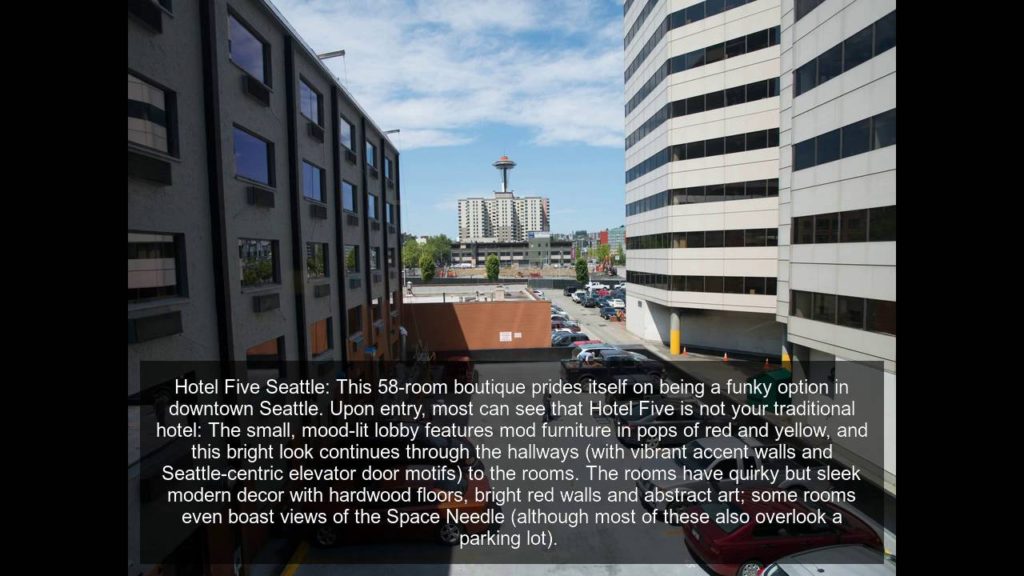 Check out these amazing views at Seattle hotels

Silver Cloud Hotel – Seattle Stadium: An upscale property less than a 10-minute drive from downtown, the Silver Cloud offers not only beautiful waterfront views, but also a front-row seat overlooking Safeco Field, home of the Seattle Mariners. It’s also within walking distance of Pioneer Square’s restaurants and shops, and guests can also enjoy the on-site pool and gym.
Four Seasons Hotel Seattle: It’s hard to go wrong with the Four Seasons Seattle, which has, arguably, some of the best views in the city, not to mention a restaurant with an acclaimed Washingtonian chef, a rooftop infinity pool and 147 spacious, classically comfortable rooms. The business-y surroundings might preclude the opulence of other, larger Four Seasons properties, but what you lose in neighborhood ambience you gain in vistas and proximity to the best Seattle attractions.
The Edgewater, A Noble House Hotel: Built in 1962 for the World’s Fair, The Edgewater, A Noble House Hotel is an upscale property located directly on Puget Sound. Its picturesque setting and unique vibe have attracted a long list of legendary musicians over the years, including the Beatles and David Bowie. All 223 modern lodge-style rooms have fireplaces, mini-bars and sleek bathrooms, while some suites also feature whirlpool tubs and waterfront patios or balconies. A chic restaurant and bar sits on the water and a cafe is in the gift shop.
Pan Pacific Seattle: This elegant, contemporary luxury hotel is an excellent choice for travelers with business in northern Belltown or South Lake Union. That said, its location is a bit of a schlep to major tourist sights and the coveted waterfront, though Pan Pacific redresses this with free shuttle service to the downtown area – and epic views of the Space Needle from some rooms. All 153 of them have a clean, serene design, plus features like flat-screen TVs, Keurig coffee machines, free Wi-Fi and bathrooms with large Japanese soaking tubs and separate rainfall showers.
Motif Seattle: The Motif is an artsy upper-middle-range hotel located a couple of blocks from Pike Place Market in downtown Seattle. Its 319 rooms are comfortable and stylish and have mini-fridges and high-end coffeemakers — many also have spectacular views of the waterfront and Olympic Mountains. The hotel has a great restaurant and rooftop bar with room service and there’s a gym, but no spa or pool.
Hotel Five Seattle: This 58-room boutique prides itself on being a funky option in downtown Seattle. Upon entry, most can see that Hotel Five is not your traditional hotel: The small, mood-lit lobby features mod furniture in pops of red and yellow, and this bright look continues through the hallways (with vibrant accent walls and Seattle-centric elevator door motifs) to the rooms. The rooms have quirky but sleek modern decor with hardwood floors, bright red walls and abstract art; some rooms even boast views of the Space Needle (although most of these also overlook a parking lot).
Inn at the Market: The elegant, upscale 76-room Inn at the Market is one of Seattle’s most popular hotels, in large part due to its unbeatable location: It’s the only hotel in the Pike Place Market, right in the heart of downtown Seattle and overlooking the bay. Rooms are sophisticated and contemporary, with high-end amenities such as Hypnos beds, Sferra linens, Antica Farmacista toiletries, Keurig coffeemakers and free Wi-Fi. Many have stunning market and water views. Its four restaurants are known among locals for their excellent cuisine (which ranges from sushi to French and Korean), and its rooftop deck has some beautiful views as well.
Renaissance Seattle Hotel: Conveniently situated downtown, the Renaissance is a solid upscale pick for Seattle. This pet-friendly property includes up-to-date features such as a fitness center, on-site dining that includes a rooftop wine bar, coffee shop and restaurant, and several meeting room options. With 557 guest rooms, it’s one of the largest hotels in Seattle — and many of the rooms benefit from views of the city (with the Space Needle in the background) or coastline. All rooms come with mini-fridges, work desks and 24-hour room service.