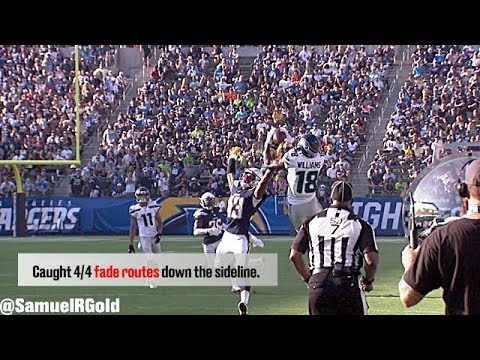 This past week, I had the pleasure of going to Seahawks’ training camp for three days. During my time there, I met some players, did some interviews, and was able to observe the practices up close and in person for the first time. It was awesome!

One of the standout players from camp on Friday, just two days before the Seahawks took on the Los Angeles Chargers, was wide receiver Kasen Williams. He made multiple spectacular catches.
Not only did Williams have a good few days of training camp, but he carried that over to this past Sunday’s game. He put up a monster performance versus the Chargers catching all four passes thrown his direction for 119 receiving yards. Just like in practice, Williams showed his mastery of the sideline fade route.

In this video breakdown, I look at his four receptions and discuss the importance of the release and hand usage in winning on a fade route.

Going into this season, the Seahawks receiving corp is very crowded. Seattle has Doug Baldwin, Jermaine Kearse, Tyler Lockett, Paul Richardson, and they also drafted Amara Darboh out of Michigan. While I can’t guarantee Williams will earn a spot on the active roster, he’s shown enough in the first preseason game to make Pete Carroll and the rest of the Seahawks’ coaching staff seriously consider him going forward.