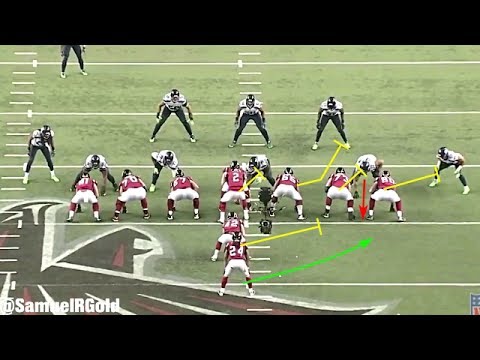 Last week, we looked at Michael Bennett as a pass rusher in the Seattle Seahawks’ defense. We discussed his role in base packages and his role on third downs or obvious pass rush situations. As a continuation, I wanted to complete my breakdown and look at his ability to defend the run. In my opinion, he is an elite run defender.

His understanding of how to use his alignment to create leverage is extremely valuable to this defense. During his eight seasons in the NFL, Bennett has mastered the ability to defend the zone run. In both of the Seahawks’ games versus the Atlanta Falcons, he dominated Jake Matthews and Ryan Schraeder at the point of attack. He consistently bullied them into the backfield and forced early cutbacks by Devonta Freeman.

From a contract standpoint, Bennett re-signed to a three year – $30 million deal at the very end of the 2016 season. Some people have questioned if he’s worth the money. In my opinion, I believe he’s a complete player and that he’s worth every penny.

Next up is Dak Prescott looking at his incredible season with the Cowboys!