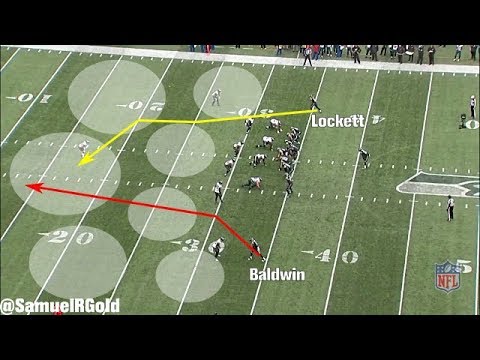 With Tyler Lockett finally returning to the practice field, I felt it was time to do a film update. For this video, I tracked his 66 targets from his 2016 season and looked at the general trends of his role in the Seahawks’ offense. Since I did this last offseason, his potential change in role was actually of more interest to me. Well after studying his tape, his role was actually largely the same as it was last season.

Based on his tape, a large portion of his role in the Seahawks’ offense was to horizontally stretch the defense. Quick bubble screens made up a good portion of his routes. In many zone based schemes like Alex Gibbs’ for example, teams will use outside zone to move the linebackers. Bubble screens in Seattle’s offense accomplish the same thing.

While his season ended prematurely, it’s important to note that a large portion of his role was exactly the same as it was last year. Since making that video, I was really hoping that they were going to use him in a more diverse way. However, they have players like Doug Baldwin and Jimmy Graham and they recently drafted Amara Darboh out of Michigan. This signals to me that his role and upside will stay relatively capped. As a former 3rd round pick out of Kansas State, this isn’t necessarily a bad thing considering he is heavily utilized on special teams, but I won’t expect him to break 1000 receiving yards any time soon, though.