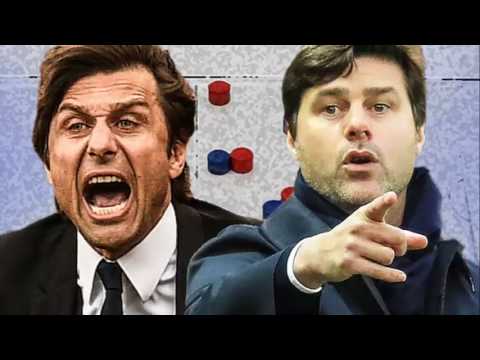 football news: Premier League managers must learn how to play against 3 4 3

Premier League managers must learn how to play against 3-4-3
Chelsea were the Premier League’s 3-4-3 trendsetters last season and the formation is likely to be even more popular in the new campaign. Sky Sports pundit Gary Neville has described it as the hardest system to play against, so how do you stop it? We take a look.

Antonio Conte’s switch to 3-4-3 during Chelsea’s 3-0 loss to Arsenal in September is regarded as the biggest turning point in last season’s Premier League title race. After a faltering start to the campaign, the new formation provided the foundations for their runaway success.

Victor Moses and Marcos Alonso became dangerous outlets at wing-back, and the defensive stability provided by three centre-backs and two defensively-minded central midfielders freed up Eden Hazard in attack. Chelsea outfoxed their opponents. From October onwards, they won 27 of their 32 Premier League games and only lost three
The winning formula inspired their rivals. By the time Chelsea lifted the trophy in May, 18 of the Premier League’s 20 sides had tried it out for themselves. According to Opta, there were 135 instances of teams using three at the back compared to just 22 in the previous campaign.

It is a significant tactical shift which looks set to continue in the new campaign. This summer has seen Pep Guardiola’s Manchester City spend a whopping £126m on powerful full-backs who can play as wing-backs, while Arsene Wenger has already confirmed that Arsenal will continue with the three-at-the-back set-up with which they finished last season.

So how exactly do you play against this newly-favoured formation
In most cases, matching up to it proved the best way forward last season. It certainly worked for Tottenham, when Mauricio Pochettino switched to 3-4-3 formation for their 2-0 win over Chelsea at White Hart Lane in January. Spurs were able to cancel out the visitors all over the pitch, and there were lessons in the way they attacked Conte’s side, too.

“Thinking of the reasons why Spurs beat them, any manager needs to think, ‘Where can we hurt them? Where is the space?'” said Sky Sports pundit Jamie Carragher. “Against this Chelsea system, the space is always around the wing-backs. It is either in front of them or behind them
When the wing-backs are high teams can try to expose that by playing the long ball down the line and picking up the second ball. When Chelsea go to a back five, the problem is the distance that the two midfield players have to cover. It’s a big problem for Chelsea. That’s where the space is, either side of the central midfield players, and that’s what you need to exploit against Chelsea.”

Spurs were able to do that for both of their goals, with Christian Eriksen finding pockets of space in those wide positions to cross for Dele Alli to score. “They are the areas where you can hurt this Chelsea team,” added Carragher. “It’s not easy, but it’s something for us all to look at.
Premier League managers might also look at how Tottenham played without the ball. A 3-4-3 formation relies on accurate distribution to build attacks from deep positions, but Spurs were able to disrupt Chelsea’s rhythm with fierce and coordinated pressing high up the pitch.

It forced Chelsea to go long, with David Luiz registering his lowest passing success rate of the season (68.8 per cent) and N’Golo Kante losing possession more times (16) than in Chelsea’s previous two games combined. Under constant pressure and without controlled possession, Conte’s men found themselves on the back foot.

Matching up to Chelsea’s 3-4-3 formation also proved successful for Manchester United during their 2-0 win at Old Trafford in April. Rather than high pressing, however, the defining feature of that victory was Ander Herrera’s man-marking job on Eden Hazard. With their dangerman nullified, Chelsea failed to register a shot on target for the first time in a decade.

Mourinho used his post-match press conference to point out that the same approach had worked when they met in the FA Cup a month earlier. “We went to Stamford Bridge in the FA Cup with the same tactics and the game was totally controlled when we played with 11 players,” he said. “The performance was very similar today, but the difference was we had 11 players for 90 minutes.”

If Manchester City and Arsenal do line up in the same formation in the season ahead, it would be no surprise to see Mourinho use the same approach on Kevin De Bruyne or Alexis Sanchez
Mourinho’s man-marking provides another template for beating an effective 3-4-3, but matching up to the formation requires the right preparation. Arsenal managed that during the FA Cup final last season, but it backfired for Leicester and Everton, who were thrashed by Chelsea earlier in the campaign having hastily tailored their tactics for the occasion.