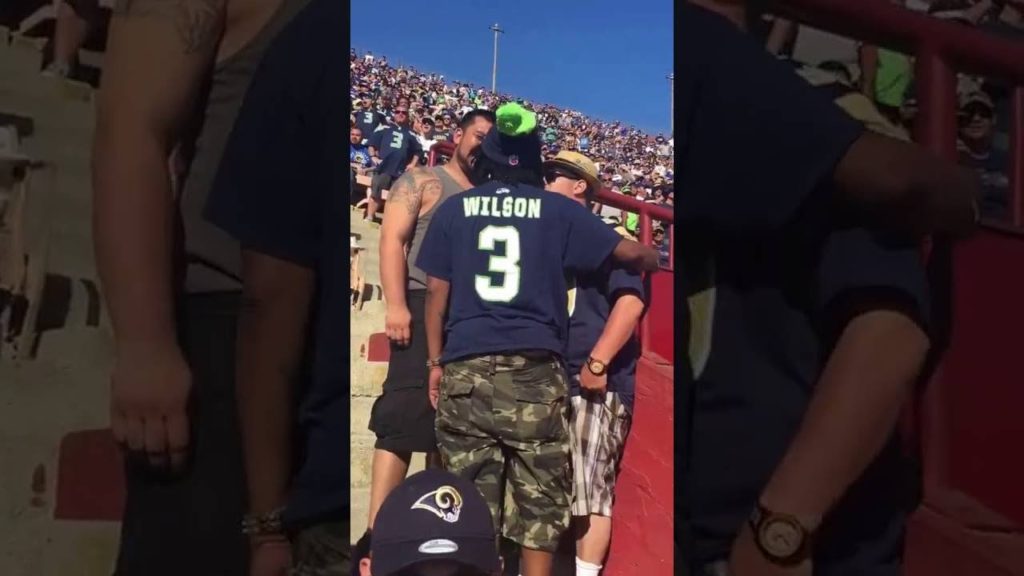 Hilarious! Man screams HELP HELP at rams vs seahawks NFL Football game when a fight breaks out.
NFL Week 3 Cheat Sheet: Peter Schrager’s picks for all 16 games
Texans-Patriots starts Week 3 with a bang
After two months of summertime Jaguars hype they’re 0-2, and after hearing that the Patriots would be in a deep hole without Tom Brady, they’re 2-0. The NFL stands for Not For Long when you try predicting things in August. But we can still go for it week to week. Here’s what I’ve got for Week 3 after a quick trivia break.

Thursday: Texans at Patriots
Between Bill O’Brien, Romeo Crennel, George Godsey, Larry Izzo, Mike Vrabel, and Vince Wilfork there will be 43 years of New England Patriots experience in that Houston Texans locker room Thursday night. J.J. Watt looked like his old self Sunday against the Chiefs, and there are no varsity jackets making the trip from Houston this time. If the fully healthy Texans can’t beat Jacoby Brissett on a short week, they’re not worthy of AFC title consideration. Tough to bet against Bill Belichick in a Thursday night game, but I like the Texans in this one.

Sunday: Cardinals at Bills
The wheels are falling off the covered wagon in Buffalo, and I don’t see the thing getting back on track this Sunday. The 2016 Cardinals are straight up loaded, and they already had their Week 1 wakeup call in the loss to New England. The Bills D allowed the Jets to score on seven of 11 drives, including the first four of the game. I just don’t see how they’ll fare much better against Carson Palmer and the Birds.
Sunday: Vikings at Panthers
Can the Vikings win without Adrian Peterson, Teddy Bridgewater and Matt Kalil? Sure. Can they win this particular game? I don’t see it. Cam and the boys were rolling on offense against the 49ers, exploding for 46 points and 353 yards through the air. Teams need to be absolutely perfect to beat the Panthers in Carolina (no one did it a season ago). I like Minnesota. That’s a tough ask without No. 28.
Sunday: Broncos at Bengals
The Broncos won the AFC a season ago, and I’ve got Cincinnati winning the conference in 2016. Well, the Bengals need to play a lot better than they did a week ago in Pittsburgh for that to even be a possibility. This was a wild Monday night game a year ago. Brock Osweiler versus AJ McCarron. Well, two different QBs, here, and I like Andy Dalton to get the Bengals back on track and to win their home opener over Trevor Siemian and Co.
Sunday: Lions at Packers
I’ll be working the sidelines for FOX on this one and can’t help but think the Lions are enduring a rough week of practice. Detroit committed 17 penalties last week and lost by just one point on a late touchdown pass. That’s a tough pill to swallow, especially at home. Both offenses should get back on track Sunday, but I like the home team to notch a W in its home opener at Lambeau.
Sunday: Ravens at Jaguars
The Jaguars are last in the league in point differential (-28), 30th in the league in third-down defense and 30thin the league in rushing. No one expected the Ravens to be back so fast, but I can see 3-0 in their immediate future. Joe Flacco has a few deep threats now, and that Jacksonville secondary was absolutely torched last Sunday in San Diego. No reason Flacco can’t do the same.
Sunday: Browns at Dolphins
The Dolphins are 0-2 and have at times this season looked downright putrid. And yet they’re still two-score favorites Sunday. I’ve seen a lot of Cody Kessler at the college level when he played at USC. I would never say I know as much or can even sniff as much quarterback expertise as Hue Jackson. I’ll just say he (and the Browns) liked Kessler a lot more than I did as an NFL Draft prospect. Never count Hue out, but I like the Dolphins here.
Sunday: Redskins at Giants
On paper, these are two teams headed in very separate directions. But this was exactly the case back in 2007, when the Giants’ defense had given up a combined 80 points in Weeks 1 and 2 and had Tom Coughlin’s butt on the hot seat. The Giants traveled to Washington for a make-or-break Week 3 matchup, and Big Blue stopped the ‘Skins on a goal line stand and went on to rattle off a few victories and win the Super Bowl. Washington needs this one in the same way. The sharks in the water — the media!!! — are circling. I think this is a galvanizing one on the road. Washington finds a way.
Sunday: Raiders at Titans
Commitment to Excellence has been (at least temporarily) replaced with Commitment to Getting Absolutely Torched. The Raiders have given up more than 500 yards