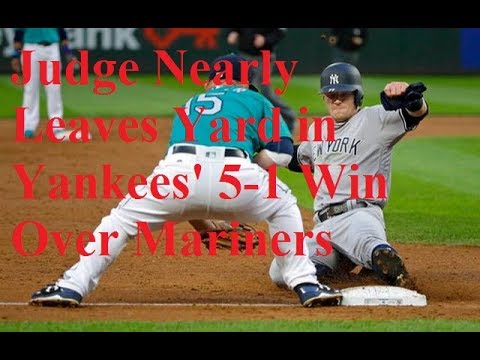 Judge Nearly Leaves Yard in Yankees’ 5 1 Win Over Mariners
SEATTLE (AP) — The consensus was that any projections on the latest mammoth shot off the bat of Aaron Judge far underestimated the actual distance.

An approximation of 440 feet did seem a little off when the ball nearly left the stadium.

Judge hit a colossal three-run homer that nearly soared out of Safeco Field, and CC Sabathia won on his 37th birthday as New York beat the Seattle Mariners 5-1 on Friday night.

Judge’s 31st home run in the fifth inning was memorable and nearly historic . The big slugger clobbered a hanging curveball from starter Andrew Moore (1-2) into the second deck in left field, with the ball landing three rows from the top of the stadium. No one has hit one out of Safeco during a game since the ballpark opened midway through the 1999 season.

See you next video …