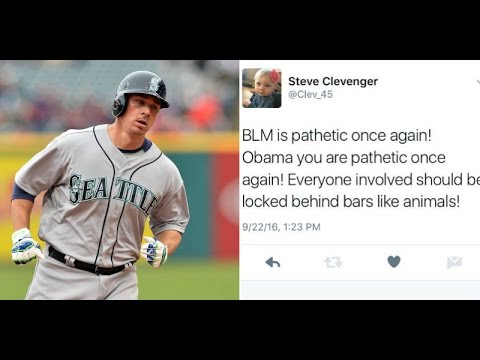 Mariners catcher Steve Clevenger tweets racist things, but doesn’t want you to think he’s racist
——————————————————————————————-
Steve Clevenger is the backup catcher for the Mariners, and currently injured. Don’t feel bad if you haven’t heard of him previously, as that’s a pretty remote roster spot as far as baseball is concerned. You likely heard of Clevenger on Thursday night or Friday morning, though, as he tweeted criticism of Black Lives Matter and the athletes kneeling during the playing of the national anthem.
The first screenshotted tweet is idiocy, as SB Nation’s Mariners’ blog Lookout Landing wrote on Thursday. The second, though, where Clevenger decides to refer to Black Lives Matters supporters and President Barack Obama as “animals” who should be behind bars, pushes this from “questionable word choice and potentially racist” to “oh wow yeah that’s racist, Steve, Jesus.”