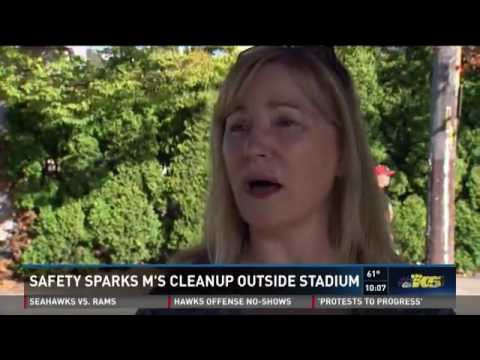 SEATTLE, Wash. — In a city grappling with the best method to assist the homeless while also cleaning numerous encampments, the Seattle Mariners have chosen to clean public property near Safeco Field on their own.

Since April, the team has hired a company to clean homeless encampment areas around the stadium, namely on 3rd and 4th Avenues. A spokesperson with the Mayor’s office calls it an informal arrangement.

The team is not moving people from their camps, Strong said.

Concerns for the Mariners extended to RV encampments earlier in the summer. During a June meeting with the Washington State Major League Baseball Stadium Public Facilities District, Mariners’ attorney Bart Waldman called the areas “not a pretty sight” adding, “it continues to be a problem.”

Waldman said the team was also escorting some staff from Safeco Field for safety reasons. The Mariners said the issue with the RV camps no longer exists.

Those that camp near Safeco Field said they try to clean up on their own, but welcome the additional help.

“That would be nasty, if all the fans were walking in and seeing beer cans and trash everywhere,” said William Goins, “They might not want to come.”