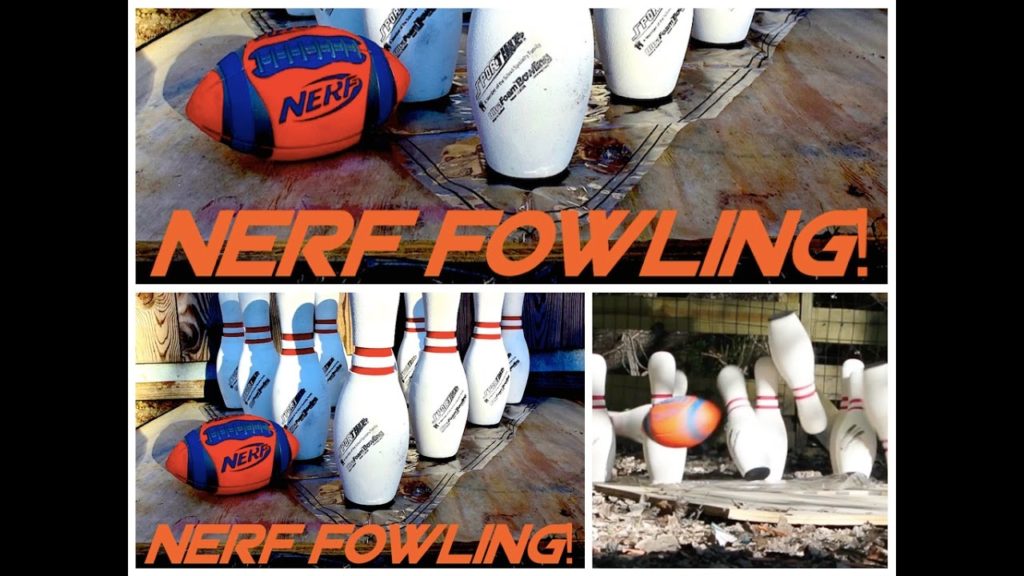 Nerf Fowling! Happy Thanksgiving from our family to yours!

So, what the heck is Fowling? In short, Fowling is the combination of Football, Horse Shoes and Bowling! Three things that were destined to come together says Chris Hunt the creator of the game.

When Chris Hunt brought his make shift bowling lane to the parking lot party of the Indianapolis 500 back in 2001 for some pre-game frames a beautiful thing happened when some dudes nearby were playing catch with an old pig skin and one of the guys missed a bad pass. One bounce in the wrong direction and the ball steered right into the lane and hit the pins knocking them over! Thus Fowling begins! A true “Strike” if there ever was one!

Basically you need 20 bowling pins and one football. Two wood platforms (see the How to video below) for the pins to set on and the football to “Bounce” on. We made our game using outdoor pins I found on the Walmart website, there made by Sportime (This is the way the company spells it) titled “Ultra Foam Bowling” Item number 1328208 This set of pins was perfect for what we wanted to do, there soft, regulation size and weighted just enough (There not officially weighted) to keep upright from the wind or the ball bouncing next to them without the vibration tipping them over. I was truly impressed with them! What’s more? Each set comes with a storage bag (Back pack) and a place mat for you to set your pins up correctly every time you play!
Our choice of football was the regular mid-size Nerf football and you can find one just about everywhere!

Each team (or player) throws the ball at the group of pins across from them (this is their set of pins) taking turns back and forth until one team has knocked down all of their pins first. Once one team has knocked down all their pins, this is the end of the “Frame”. The team or players then change sides and begin the next Frame. Once one team (or player) has won 2 of 3 frames they have won the contest. Each “Frame” is considered “One” point.

During game play, Defensive players can catch or block all “Offside” passes or bounces but they cannot block or catch a ball that is over or on the board until it is off the board or stopped naturally.

I’ll be posting the game play Instructions (Our modified version) on our website at www.fasterthedragster.com as a PDF file so you can download or print a reference sheet for your game.

Thanks for watching and hitting that thumbs up tab! We really appreciate you guys and if your new to our channel please subscribe so you never miss a show! Tune in for our Christmas Tree Nerf Blaster Shooting Gallery!

If you are interested in building Fowling Lanes check this great video out on how to make em’ right https://youtu.be/XbQkeQnzfjw

Faster the Dragster and the Diecast daredevils are not endorsed or sponsored by NERF, SPORTIME, or FOWLING they are registered trademarks. This video is a unofficial parody of an official game of Fowling however, we modified the rule set and supplies to play out our game. Our review of the Bowling pins is independent and of our own opinion, we love these pins and the Nerf Football we used! We found the Nerf Football a fantastic replacement of the “real” football because we elected to use the “Ultra Foam” pins instead of “real” bowling pins.

All in all, we had a fantastic time playing this game and plan on making this a part of our BBQ backyard games we play at family outings and get togethers!

My suggestion for younger players is to simply have the game “closer” and use regulation size plastic bowling pins with the nerf football. If you couldn’t tell by the video this game is a little harder then you think and it sure seems that the worse passers in general, are better at Fowling! It’s awesome, you’ve got to try it! It’s so much fun!