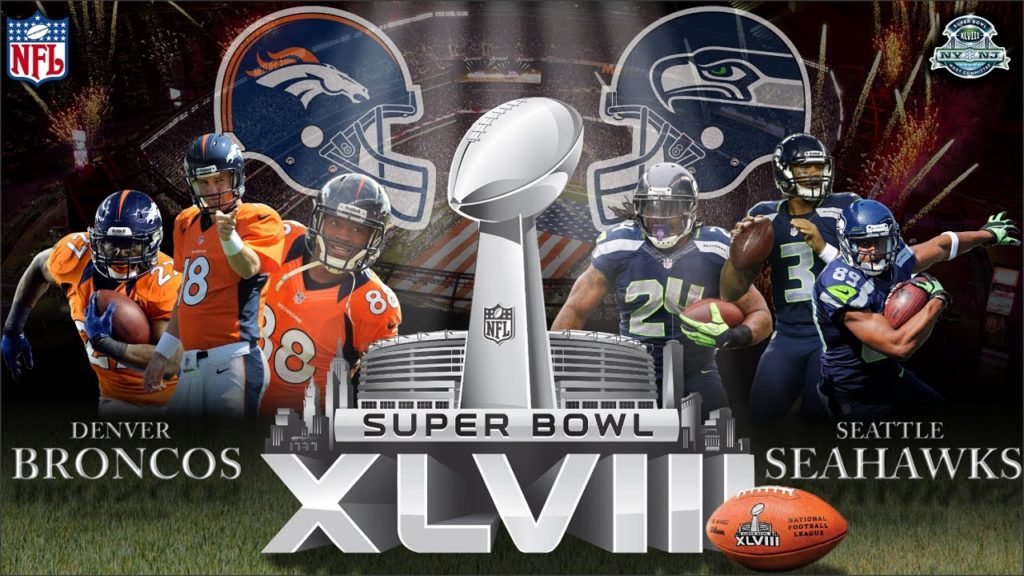 Super Bowl XLVIII was an American football game between the American Football Conference (AFC) champion Denver Broncos and National Football Conference (NFC) champion Seattle Seahawks to decide the National Football League (NFL) champion for the 2013 season. The Seahawks defeated the Broncos 43–8, the largest margin of victory for an underdog and tied for the third largest point differential overall (35) in Super Bowl history with Super Bowl XXVII (1993).[8][9] It was the first time the winning team scored over 40 points, while holding their opponent to under 10. This became the first Super Bowl victory for the Seahawks and the fifth Super Bowl loss for the Broncos, the most of any team. The game was played on February 2, 2014, at MetLife Stadium at the Meadowlands Sports Complex in East Rutherford, New Jersey,[10] the first Super Bowl played outdoors in a cold-weather city.[11]

Seattle built a 22–0 halftime lead, and then a 36–0 advantage before allowing Denver’s first and only score on the final play of the third quarter. The Seahawks defense scored a safety on the first play from scrimmage, the quickest score in Super Bowl history. They also became the first team in a Super Bowl to score on a safety, a kickoff return for a touchdown, and an interception return for a touchdown. The Broncos were held to almost 30 points below their scoring average.[14] Broncos quarterback Peyton Manning, a five-time NFL Most Valuable Player (MVP) award winner, threw two interceptions in the first half. Seahawks linebacker Malcolm Smith, who returned one of those interceptions 69-yards for a touchdown, recovered a fumble and made nine tackles, was named Super Bowl MVP.[15] Throwing for two touchdowns with no interceptions, Seahawks quarterback Russell Wilson became the fifth straight quarterback to win the Super Bowl without an interception, joining Drew Brees, Aaron Rodgers, Eli Manning and Joe Flacco; however, Wilson was the only quarterback on the list not to be named MVP.[citation needed]

At the time, the game’s telecast on Fox broke the record for the most-watched program in American television history,[16] with an average audience of 111.5 million viewers,[16][17] while the Super Bowl halftime show featuring Bruno Mars and Red Hot Chili Peppers reached up to 115.3 million viewers.[16][17] Also at the time, the game broke the then-record for the most discussed game on Twitter, with over 24.9 million tweets