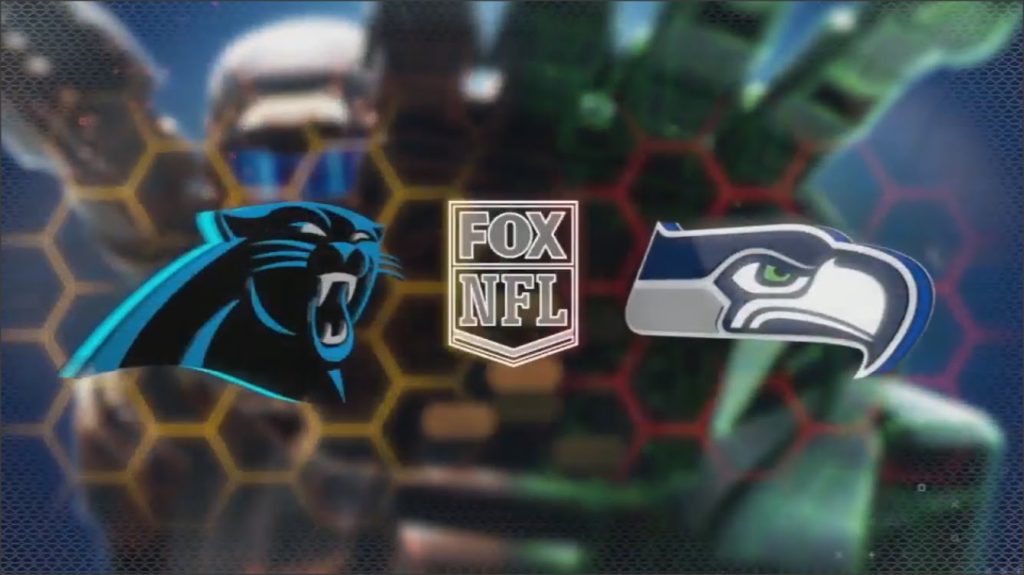 After both teams opened with punts on their first two possessions, Seattle forced the first turnover of the game when Richard Sherman intercepted Cam Newton at the Seahawks’ 38-yard line. Following another Seahawks punt, Carolina again turned the ball over when Newton fumbled the handoff on an option play and it was recovered by Seattle’s Tony McDaniel at Carolina’s 28-yard line. On the ensuing possession Seattle opened the scoring when Wilson connected with Doug Baldwin on a 16-yard touchdown pass. Carolina responded with a 14-play, 79-yard drive which consumed over 8 minutes and ended with a Newton 7-yard touchdown pass to Kelvin Benjamin to tie the game at 7. Seattle then retook the lead when, on a 3rd-and-7 play, Wilson passed to Jermaine Kearse who made a one-handed catch and ran 63 yards for a touchdown, the longest touchdown reception in Seahawks playoff history. Carolina then mounted a 13-play drive into Seattle territory to close out the half. After driving to the Seattle 24-yard line, Earl Thomas appeared to intercept Newton at the 2-yard line, but the interception was overturned after a review. While attempting a 40-yard field goal, Graham Gano missed wide left but Kam Chancellor was called for running into the kicker. Gano then converted a 35-yard field goal as time expired with Seattle leading 14–10 at halftime.

On the first drive of the second half, Seattle got into Carolina territory before Wilson was sacked on 3rd down by Mario Addison to force a punt. After a Carolina punt, Seattle mounted a 12-play, 69-yard drive which included a 25-yard Marshawn Lynch run and reached the Carolina 7-yard line but settled for a 37-yard Steven Hauschka field goal when Wilson was sacked by Thomas Davis. Seattle forced another Carolina punt, and on their next drive Wilson found Luke Willson for a 29-yard pass to the Carolina 25-yard line and then connected with Willson again for a 25-yard touchdown to take a 24–10 lead. Facing a 3rd-and-13 from their own 17-yard line, on Carolina’s next drive, Newton converted with a 19-yard pass to Ed Dickson, then connected with Greg Olsen on a 31-yard pass to the Seattle 19-yard line. Newton, however, was then intercepted for a second time by Chancellor, who returned it 90 yards for a touchdown. Down by 21 points, Newton threw a 15-yard touchdown to Benjamin with 2:34 remaining to make the score 31–17, but Carolina was unable to recover the onside kick and Seattle ran out the clock for the victory.

Wilson finished as the leading passer, going 15-for-22 for 268 yards and 3 touchdowns. Kearse recorded 129 yards and a touchdown on 3 receptions. Rookie Benjamin led Carolina with 7 receptions for 75 yards and 2 touchdowns. The win was Seattle’s eighth consecutive home playoff win. Seattle also became the first defending Super Bowl champion to win a playoff game since the 2005 season