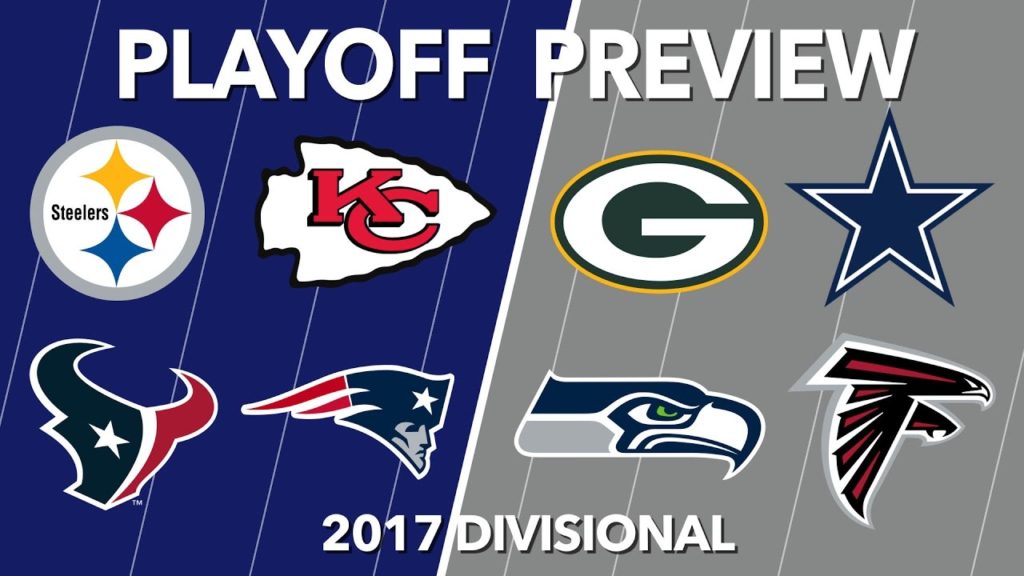 This weekend presents 4 great games in the 2017 NFL divisional playoff round. The games include the Seattle Seahawks vs. the Atlanta Falcons, The Houston Texans vs. the New England Patriots, the Pittsburgh Steelers vs. the Kansas City Chiefs, and the Green Bay Packers vs. the Dallas Cowboys. Each of these games is a rematch from the regular season. In this episode football legend Brandon Perna of That’s Good Sports predicts the outcome of each game, with an accuracy that can only be described as accurate.

Nobody believes the Texans, led by quarterback Brock Osweiler can go into Gillette stadium and beat Tom Brady & Bill Belichick on their home turf. The Patriots defense isn’t letting anyone score, averaging 15.6 points per game, and even though their star tight end Rob Gronkowski is on IR, the Pats have a slew of offensive weapons in Legarrette Blount, Michael Floyd, Julian Edelman, Chris Hogan, Martellus Bennett, and great play from their offensive line. We are hoping for a miracle upset led by Jadeveon Clowney and the Texans defense.

The main story this week is that there are a bunch of very talented running backs playing. Le’Veon Bell and Thomas Rawls had a field day during the wild card weekend, both rushing for over 160 yards and a couple touchdowns. Bell faces a bigger challenge against a great Kansas City defense, even though their strength hasn’t been stopping the run. Justin Houston will play for the Chiefs, and everyone is wondering if Tyreek Hill will continue with his specil teams touchdown rampage. Alex Smith and Travis Kelce will have to work hard to keep up with Ben Roethlisberger and Antonio Brown.

The Seahawks defense is tasked with stopping Matt Ryan, Julio Jones and the NFL’s highest scoring offense. It can be done if Russell Wilson and Thomas Rawls control the clock, but Vic Beasley may have a high sack total against the Seahawks line. Finally we’ll see the Packers and Cowboys in a game led by two prolific rookies, Dak Prescott and Ezekiel Elliott. They face their biggest game of their NFL career, against the hottest QB in the game right now. Rodgers has thrown 12 TD’s and 0 picks in his last 3 games.