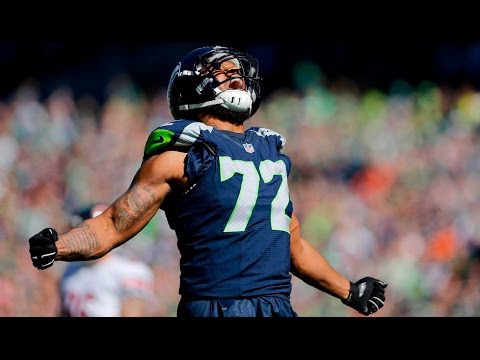 Seattle defensive end Michael Bennett is one of the more emotional and entertaining players in the NFL. Naturally, after the Seahawks suffered a pretty thorough beatdown at the hands of the Atlanta Falcons Saturday, with 36-20, Bennett was not in a great mood.

He channeled his frustrations into a fiery exchange with a reporter, Bill Wixey of Seattle’s Fox affiliate, following the game. After Wixey asked about the Seahawks’ pass rush and why they weren’t able to mount significant pressure on Matt Ryan, Bennett lashed out at the reporter and threatened him.

“We got a lot of pressure,” Bennett said, according to The Seattle Times. “He threw the ball really fast. There was some busted stuff going on so obviously you don’t know football. He threw the ball pretty fast. He did his thing. We rushed as good as we could. Don’t point and say we didn’t do what we needed to do, OK? Don’t do that.”

Though there was a lot of emotion in Bennett’s initial response, what he had said to this point was fine. But then he got really worked up.

Bennett also asked the reporter, “What adversity you went through?” The Seattle Times’ Matt Calkins pointed out the irony of the question.

Bennett got into it with Atlanta offensive lineman Ryan Schraeder during the game.

Listen, I get it: You play hard, you give it your all, and when you come up short, the last thing you want is some reporter who never played professional sports questioning your performance. It seems ridiculous. But regardless, there’s still a level of professionalism that’s required. At the very least, don’t threaten the guy.

Bennett is a fun guy, and we usually enjoy his antics, but this time—clearly—he went way, way out of bounds. He’ll have a long offseason to think about this. If he doesn’t already regret it and recognize it was an absurd way to handle himself, he probably will in the near future.