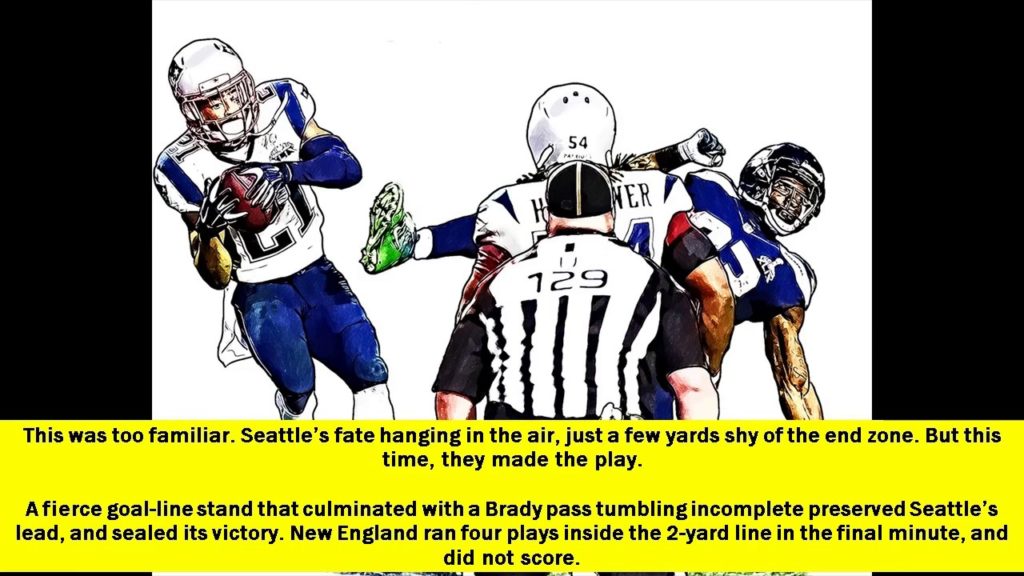 FOXBOROUGH, Mass. – They had played 244 snaps in the past three weeks, the most of any squad in that span. It brought them a tie, a loss, and a victory.

In their way, however, stood something different.

This was Tom Brady and the New England Patriots. The same group that celebrated on the turf in Arizona just two s ago – a coronation that the Seahawks felt they had let slip through their hands.

Yet, when the Seattle Seahawks needed them the most, this defense – no doubt gassed – won the game. It helped fend off a late Patriots rally, 31-24, in a Sunday night thriller.

This was too familiar. Seattle’s fate hanging in the air, just a few yards shy of the end zone. But this time, they made the play.

A fierce goal-line stand that culminated with a Brady pass tumbling incomplete preserved Seattle’s lead, and sealed its victory. New England ran four plays inside the 2-yard line in the final minute, and did not score.

That wasn’t the first play the defense made to win the game.

Holding a one-point lead in the fourth quarter, Brady and the Patriots were driving.

But safety Kam Chancellor, making his return from a groin injury, tackled Patriots wide receiver Julian Edelman after he made a reception. And as he brought him down to the turf, he punched the ball out of his hands, and watched it squirt out. The Seahawks recovered and scored a touchdown on the ensuing drive.

Brady finished the game with 316 yards and one interception on 23-of-32 passing.

And a rookie multi-purpose threat emerged for Seattle, as running back C.J. Prosise ran the ball 17 times for 66 yards and added seven catches for 87 yards.

This game was heavily hyped up. A rematch of Super Bowl XLIX two years ago, this is the pairing some experts predicted to be this year’s title game. And Sunday night’s clash showed that if both these teams do make it that far, the rematch will likely be well worth it.

If these are the two teams in the NFL, they did not disappoint.

There were seven lead changes. There were explosive plays. And there was all the drama that made this one of the games of the seaso