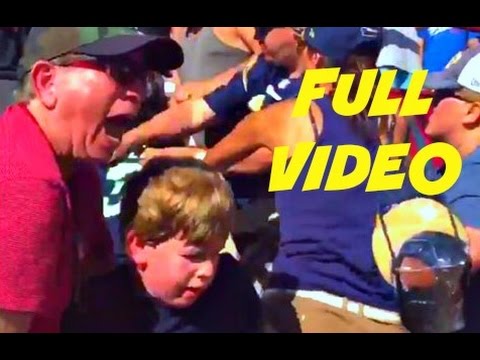 It seems like not a week goes during the NFL season without a scuffle in the stands going viral, and the Rams’ first home game in their return to Los Angeles was not without one. In this video, a Seahawks fan and a Rams fan are jawing at each other. It escalated when two women were trying to get by in the aisle. The Seahawks fan shoved one of them, and then got summarily taken down.

The most harrowing aspect of this clip comes when the fight spills over and knocks over a young boy. He looks rightfully terrified, and the adult in the area screaming for help was 100% justified. Imagine taking your family to a game and having something like this happen.

It’s never good to see a child caught up in a fight at a football game. That should never happen. And in reality, it’s a black eye for both fan bases.

With the Rams moving back to Los Angeles, the team surely is going to be in for new rivalries with both the San Francisco 49ers and Seattle. That much is known.

Let’s just hope this isn’t the start of a trend among fans of both the Seahawks and the Rams. It’s not something that should be part of the game-day experience.

In the end, Seattle fell to the Rams 9-3 in a game that wasn’t too eventful on the field.