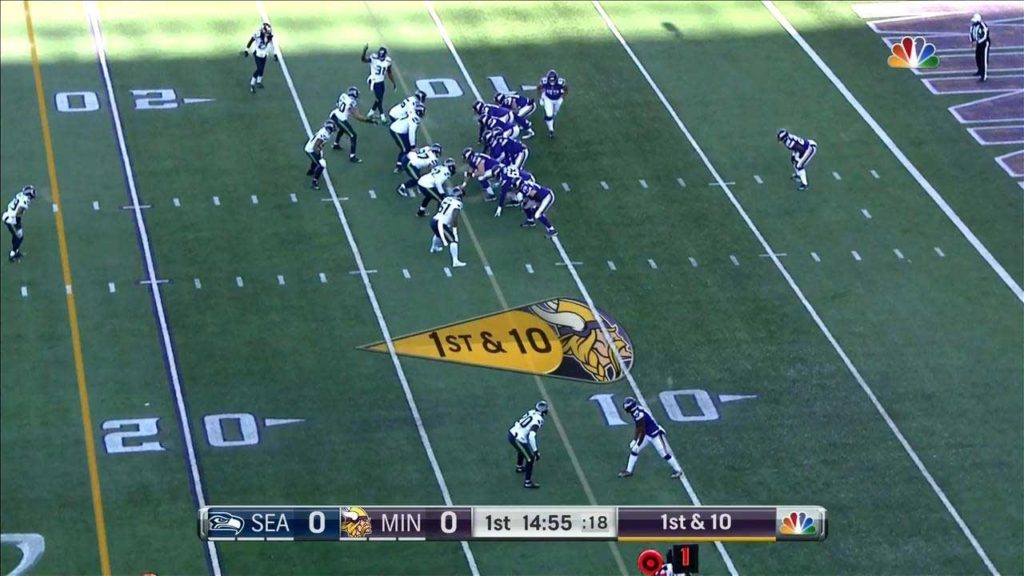 NFC: Seattle Seahawks 10, Minnesota Vikings 9
In their final game at TCF Bank Stadium – prior to the Vikings’ move to U.S. Bank Stadium for the 2016 season – Minnesota kicker Blair Walsh missed a 27-yard field goal attempt with 22 seconds remaining as the Seahawks held on to win 10–9. The temperature at kickoff was −6 °F (−21 °C), making this the third coldest game in NFL history.[12]

On their first possession Seattle went three-and-out, but punter Jon Ryan bobbled a low snap and was unable to get off a punt, giving Minnesota posssession at the Seattle 29-yard line. The Vikings drove to the 4-yard line but had to settle for a Walsh field goal to open the scoring. After both teams punted on their next possession, Seattle drove to the Vikings’ 30-yard line and faced a 4th-and-13. Rather than attempt a field goal, Russell Wilson threw a pass to Fred Jackson who was tackled short of a first down after a 7-yard gain. Neither team could score for the rest of the half, and Minnesota went to halftime leading 3–0. Both teams combined for 185 total yards in the half, the lowest in a playoff game since 2005.

On the first possession of the second half Seattle drove into Minnesota territory and again went for it on fourth down, only for Wilson to be intercepted by Trae Waynes. Minnesota was then helped by a penalty for Cliff Avril roughing the passer, and Walsh kicked a 43-yard field goal to give them a 6–0 lead. Seattle went three-and-out on their next drive, and Minnesota began their drive in Seahawks territory after a horse collar tackle on the punt return. They settled for another Walsh field goal, this time from 47-yards out, to take a 9–0 lead into the fourth quarter. With the ball on the Vikings’ 39-yard line on the ensuing drive, Wilson could not handle the snap and recovered it back at his own 45-yard line, but then found Tyler Lockett for a 35-yard completion. Two plays later Wilson threw a touchdown to Doug Baldwin, cutting the deficit to 9–7. On Minnesota’s second play of the next drive Kam Chancellor forced an Adrian Peterson fumble which was recovered by Ahtyba Rubin at the Vikings’ 40-yard line. Steven Hauschka converted on a 46-yard field goal to put Seattle ahead 10–9 with 8:04 remaining. Both teams punted on their next two drives, and Minnesota took possession with 1:42 left on their own 39-yard line. With a 19-yard pass interference call on Chancellor and a 24-yard pass from Teddy Bridgewater to Kyle Rudolph, Minnesota advanced to the Seattle 9-yard line with 26 seconds remaining. Walsh, however, kicked the 27-yard field goal wide left, allowing Seattle to kneel out the clock and preserve the victory.[13]

Bridgewater finished as the leading passer with 146 yards, while Wilson recorded 142 yards with a touchdown and an interception. Seattle held Peterson, the league’s leading rusher during the regular season, to just 45 yards on 23 carries. The win was Wilson’s seventh playoff victory, the most by a quarterback within his first four seasons. Seattle became just the fifth team to win a playoff game despite scoring ten or fewer points, and the first since 1997.