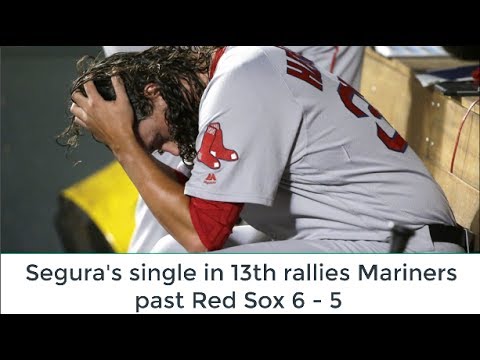 Segura’s single in 13th rallies Mariners past Red Sox 6 – 5
SEATTLE (AP) — Jean Segura rolled an RBI single up the middle with two outs in the 13th inning to cap a two-run rally and give the Seattle Mariners a 6-5 victory over the Boston Red Sox in a game that ended early Wednesday morning.

Mitch Haniger walked with one out in the 13th off Doug Fister (0-5), pitching his third inning, and was forced at second on Ben Gamel’s fielder’s choice. Guillermo Heredia, who had a three-run homer in the second, singled Gamel to third. Gamel scored on a wild pitch to tie it, with Heredia advancing all the way to third. Mike Zunino then walked. Shortstop Xander Bogaerts fielded Segura’s roller behind second, but his off-balance throw was way late.

The Red Sox, who stranded two runners in the eighth, ninth and 11th innings, had taken a 5-4 lead in the top half when Sandy Leon singled home Hanley Ramirez with two outs off Tony Zych (5-2).

Mike Zunino opened the seventh inning with his 15th home run to bring Seattle even at 4-4.

The Red Sox capitalized on a sudden loss of command by starter Felix Hernandez for three runs in the sixth to erase a 3-1 deficit.