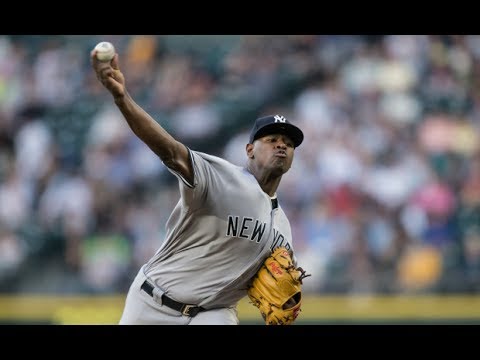 Source of the article: http://newyork.cbslocal.com/2017/07/21/new-york-yankees-seattle-mariners-luis-severino-brett-gardner/

SEATTLE (CBSNewYork/AP) — In the past week, Luis Severino has tossed a gem at Fenway Park against Chris Sale and outpitched Felix Hernandez in Seattle.

The 23-year-old All-Star is becoming the ace of the New York Yankees’ staff this season.

“I enjoy it. I knew it was going to be tough every time I face a guy like Felix,” Severino said. “I just tried to bring my A stuff, tried to make pitches, tried to get hitters out.”

Severino pitched out of trouble to throw seven shutout innings, Brett Gardner hit a solo home run off Hernandez, and the Yankees added three unearned runs late for a 4-1 win over the Mariners on Thursday night.

Severino (6-4) was overpowering when he needed to be, striking out six and getting his fastball to flash triple-digits on the stadium scoreboard even in the seventh. He allowed eight hits, but was outstanding in the big moments. The right-hander escaped jams in the first, second and most notably the fourth inning when Seattle had runners at the corners with no outs and was unable to score.

“It shows you he understands what he needs to do,” New York manager Joe Girardi said. “He has to get after it from the first hitter and that’s exactly what he’s doing because two runs could beat you when you’re facing guys like that.”

Gardner took advantage of the one costly mistake by Hernandez (5-4), driving a 2-1 pitch into the right-field seats with one out in the sixth. Other than that, Hernandez was as good as he’s been in 2017, striking out a season-high nine and pitching at least seven innings for the second time.

Aaron Judge added a broken-bat RBI single in the eighth. It was just his fourth hit in 29 at-bats since the All-Star break. The Yankees added a pair of runs in the ninth with two outs on second baseman Robinson Cano’s throwing error, allowing Didi Gregorius and Todd Frazier to score.

It was a vintage performance by Hernandez, all the way down to the lack of run support — a staple of his career with the Mariners. Hernandez has always pitched well against New York, and he was successful staying on the edges with his fastball, getting the Yankees to chase off-speed pitches out of the zone.

But he paid for a fastball he left in the middle of the plate when Gardner smacked his 16th home run of the season.

“You face a guy like Severino today, you can’t make any mistakes. I made one mistake against Gardner and he hit a homer,” Hernandez said. “I was trying to go sinker down and away, and it didn’t sink.”

The Mariners left eight runners on base in the first five innings, failing to score in the fourth with runners on first and third and no outs. Mitch Haniger popped out and Jarrod Dyson’s shallow fly failed to get Kyle Seager in from third. Mike Zunino walked to load the bases, but Severino got a groundout from Jean Segura to end the inning.

“Severino was as good as we’ve seen all year,” Seattle manager Scott Servais said. “We’ve had some well-pitched games against us, but just the stuff that he fired out there, you don’t see guys carry the velocity that late in the ballgame.”

Dellin Betances and Aroldis Chapman were both shaky in closing out the victory. Betances allowed two baserunners in the eighth and Chapman gave up one run, one hit and one walk in the ninth. Cano’s RBI double scored Seattle’s only run.

“He looked really comfortable. I thought he did a really good job,” Girardi said.

Seattle will put right-hander Yovani Gallardo back into the starting rotation in the series finale Sunday. The Mariners optioned Sam Gaviglio to Triple-A Tacoma and recalled right-handed reliever Max Povse. Gallardo had a 0.79 ERA in relief. He was 3-7 with a 6.30 ERA in 14 starts prior to his move to the bullpen in June. Seattle will still need to make a roster move when newly acquired reliever David Phelps joins the team. Phelps, obtained from Miami for four prospects, is expected to arrive Friday.

Yankees: CC Sabathia (8-3) is tied for the team lead in wins. He’ll be making his 16th start of the season and is coming off six shutout innings in a victory over Boston.

Mariners: Andrew Moore (1-1) is looking to bounce back from giving up three home runs in his last start against the White Sox.