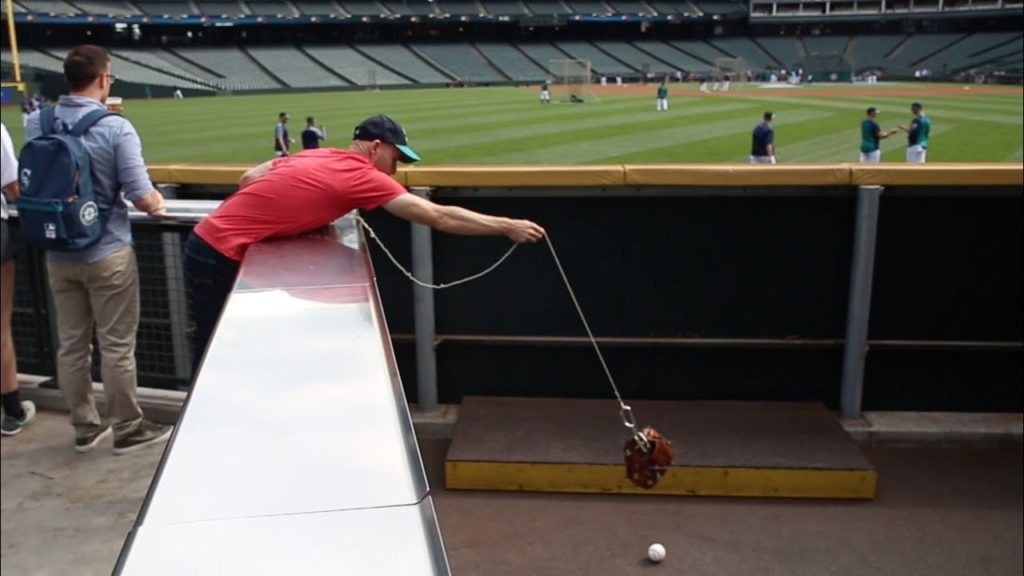 For the second time in three games at Safeco Field, I got 20 baseballs in one day! This time I put on a clinic with my “glove trick” — a device I invented more than 20 years ago which can pick up baseballs that are otherwise out of reach. Here’s a separate tutorial that shows how it works:

Also, as promised, here’s a list of all the balls I got:

2) randomly flipped into the crowd by Jarrod Dyson; no footage of this, unfortunately

3) home run by Danny Valencia; caught on the fly in deep CF

4) tossed by an unknown Mariners player in CF

5) another random/no-look toss-up by the same player; my videographer got blocked by some fans so the footage of this is not worth showing

7) thrown by Ariel Miranda in RF

8) thrown by Brian Dozier along the LF foul line

9) thrown by an unknown Twins player along the left field foul line; if you know who this is, please leave a comment and let me know (you can see this at 2:17)

10) glove trick in the gap between the LF wall and Edgar’s; this ball was thrown by Ervin Santana

11) “half-glove trick” in the left-center field bullpen; that’s what I call it when I don’t fully rig the glove with a rubber band and Sharpie, but rather just use the string to lower it knock a ball closer

12) thrown by a police officer; I was the only one who noticed that there was a ball at the bottom of the bullpen ramp

13) glove trick in the LF bullpen

14) glove trick in the LF bullpen

15) glove trick in the LF bullpen

16) glove trick in the LF bullpen; these were all BP homers by the Twins

17) glove trick in the LF bullpen; I had to knock this one closer

18) glove trick in the LF bullpen; this ball plopped down out of nowhere roughly 10 minutes after BP ended — turns out it was a home run that got caught in some protective netting. This netting is put in place everyday for BP (to protect the scoreboard, I think) and removed before the game, so the ball conveniently got dislodged as I was standing around doing nothing

Huge thanks to the Seattle Mariners for being one of the most fan-friendly teams and being cool with the glove trick (and opening the stadium 2.5 hours early everyday). This is how it should be everywhere.

Thanks to Brandon Sloter (@brandonsloter on Instagram) for filming, and most importantly, thank YOU for watching.