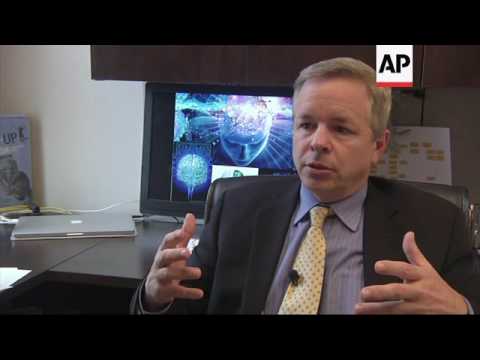 AP TELEVISION – AP CLIENTS ONLY
Atlanta – 2 May 2016
1. Setup shot of Dr. David Wright, Emory University assistant professor of emergency medicine and director of emergency neuroscience
2. SOUNDBITE (English) Dr. David Wright, Emory University:
“When you let your kid play the first best practice is the fact that you’re playing in a sports that’s a contact or collision sport means that if you have a concussion you’re gonna tell mom and dad about it. You’re going to tell coach about it, and if there is a medical person on the field you’re gonna tell them about it, you’re not going to hide it. That’s the first rule of letting them play in any kind of athletic sport. And then if one (concussion) occurs then both the coach and if there’s a health care provider on the field they need to be alerted and your definitely don’t go back in that day. All of the guidelines say don’t go back the same day and really don’t go back in until you’ve been evaluated appropriately, not just by any clinician, not by an emergency department, not by, you know, just your family, regular doctor unless they have had training in how to manage a concussion because it’s just not as simple as you might think.”
3. Dr. David Wright looking at football films on his computer
4. SOUNDBITE (English) Dr. David Wright, Emory University:
“Rec leagues are growing, I mean there… we have no idea even within our state (Georgia) how many rec leagues are even out there. There’s no one single registration, there’s no way for them to report how many concussions are going on. The CDC is desperate to find good epidemiologic data about how big the problem is. There’s no reporting mechanism. It’s not a reportable disease and frankly most of this is cared for on the sidelines or later the next day and like I said often without the intervention of a health care provider.”
5. Silhouette of Dr. David Wright looking at his office computer
6. SOUNDBITE (English) Dr. David Wright, Emory University:
“Wearing the hat of director of injury prevention here (at Emory University Healthcare) I would say prevention is absolutely the key, then you don’t have to treat, we can prevent it. So that comes through better coaching, it comes through better tackling techniques, it comes through improved rules and enforcing those rules, and then recognition, recognition is a key part. Getting athletes and coaches to except that concussions are dangerous, and that it’s no OK mask them or hide them.”
STORYLINE:
A new study says youth football players are more likely to return to the field less than a day after suffering concussions than those in high school and college.
Only 10 percent of young players with concussions resumed football that soon, but the researchers say the results suggest a need for more sidelines medical supervision and better recognition of concussion symptoms in children.
They note that younger kids may struggle to describe their symptoms, and health effects from concussions may not show up right away.
The study involved injuries during practices and games from 2012 through 2014. More than 200 teams at the youth, high school and college level were involved.
Results of the study, the first of its kind, were published Monday in JAMA Pediatrics.
===========================================================
Clients are reminded:
(i) to check the terms of their licence agreements for use of content outside news programming and that further advice and assistance can be obtained from the AP Archive on: Tel +44 (0) 20 7482 7482 Email: info@aparchive.com