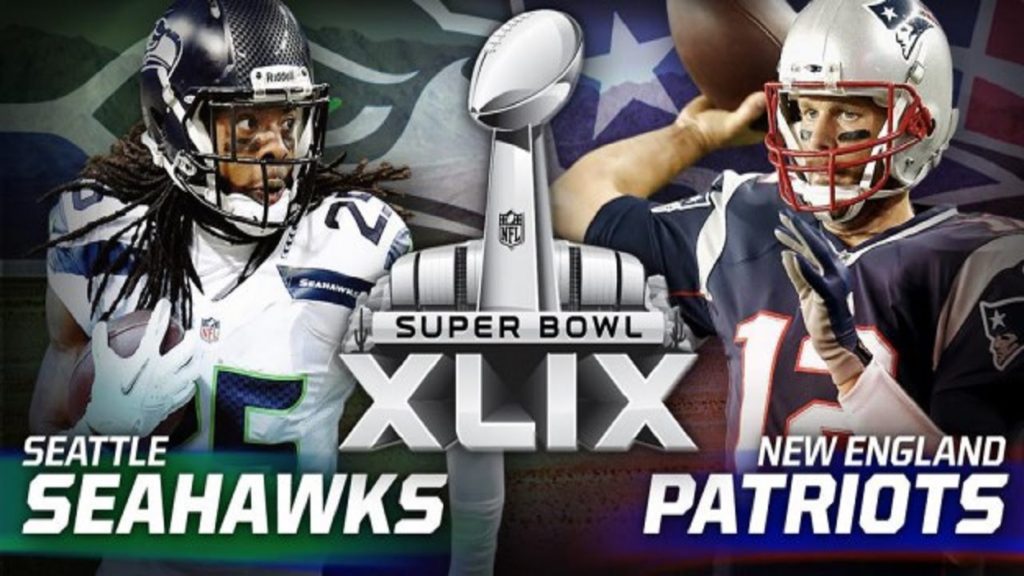 Super Bowl XLIX was an American football game played to determine the champion of the National Football League (NFL) for the 2014 season. The American Football Conference (AFC) champion New England Patriots defeated the National Football Conference (NFC) champion Seattle Seahawks, 28–24, to earn their fourth Super Bowl title. The game was played on February 1, 2015, at University of Phoenix Stadium in Glendale, Arizona. It was the second time the stadium has hosted a Super Bowl, and the third one held in the Phoenix metropolitan area.

The Seahawks finished the regular season with a 12–4 record and made their second consecutive appearance in the Super Bowl, having defeated the Denver Broncos, 43–8, in Super Bowl XLVIII, while the Patriots, who also posted a 12–4 record, joined the Dallas Cowboys and Pittsburgh Steelers as one of the three teams to have made eight appearances in the Super Bowl. For the second straight season, but only the third time in the prior 21 seasons, the number one seeds from both conferences met in the league championship game. Seattle became the first team to appear in consecutive Super Bowls since New England won two straight (XXXVIII and XXXIX).

After the teams were tied 14–14 at halftime, the Seahawks built a 10-point lead to end the third quarter. The Patriots, however, rallied to take a 28–24 lead with roughly two minutes left in the game. Seattle threatened to score in the final moments, driving the ball to New England’s 1-yard line. With 26 seconds remaining in the game, Seattle decided to pass the ball in a highly scrutinized call that resulted in Patriots rookie Malcolm Butler making a game-saving interception of Russell Wilson’s throw. Patriots quarterback Tom Brady was named the game’s Most Valuable Player (MVP) after a Super Bowl-record 37 completions on 50 attempts for 328 yards, four touchdowns, and two interceptions.

NBC’s broadcast of Super Bowl XLIX is the most watched program in American television history, surpassing the previous year’s game.[13] The game was seen by an average of 114.4 million viewers, with it reaching to 118.5 million during the Super Bowl XLIX halftime show featuring Katy Perry,[14] and then peaking to 120.8 million during New England’s fourth-quarter comeback