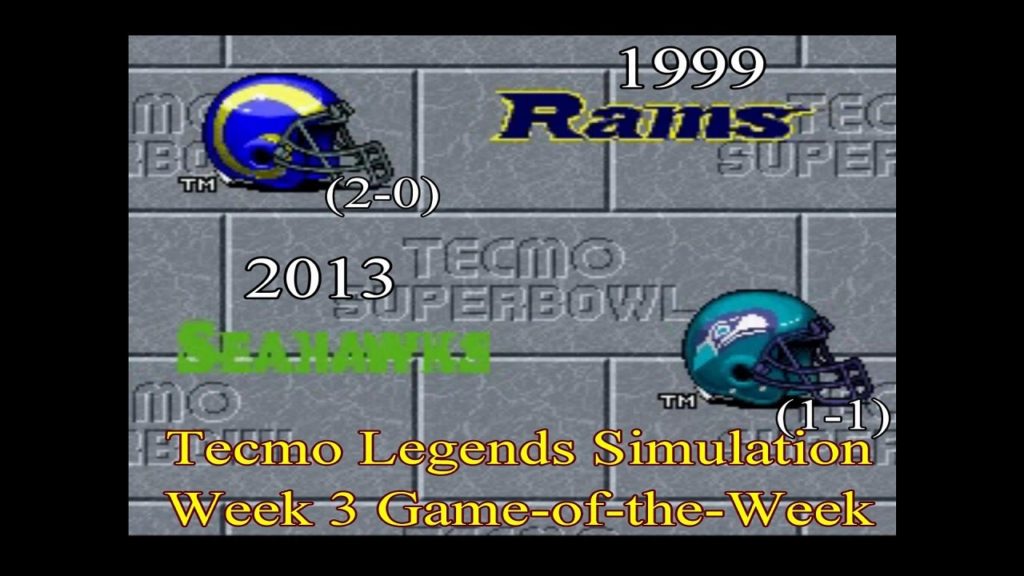 Week 3 sees the “Greatest Show on Turf” face the “Legion of Boom,” with the 2013 Seattle Seahawks against the 1999 St. Louis Rams.

The Tecmo Football Legends Simulation pits the best team from 28 NFL franchises into a season-long competition. At the end, we’ll determine the greatest NFL team of all-time…at least according to a rom edit of Tecmo Super Bowl (1993) for the Super Nintendo.

The season lasts 16 weeks, with all AFC teams playing each other and all NFC teams meeting in the first 13 weeks. The final three weeks features AFC vs NFC play. Follow along with recaps of each week’s games every Sunday, along with a full “Game of the Week” each Thursday.

To play the game yourself, download it here: http://tecmobowl.org/files/file/483-tecmo-football-legends-2016/. The download is a “ROM” file, which is the game itself. To play it, you need a Super Nintendo emulator, (i.e. SNES9x or ZSNES)

For everything Tecmo Super Bowl, visit TecmoBowl.org.
All statistics used for the making of the game and series are thanks to Pro-Football-Reference.com.