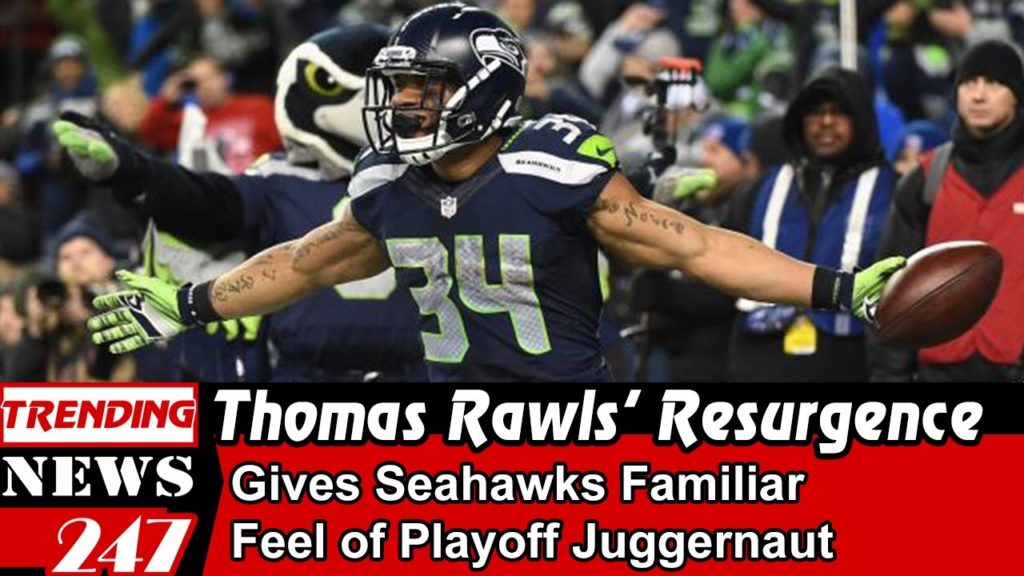 Nothing that happened as a team in the weeks before their 26-6 Wild Card Weekend trouncing of the Detroit Lions mattered. What happened? The Seahawks had alternated wins and losses each week to end the season, starting back in Week 11. There was little consistency on either side of the ball, especially with a scattered offense that scored five points one game and then 40 points the next.

Nothing that happened with running back Thomas Rawls before Saturday lingered, either. The oft-injured but highly physical runner had gained a mere 56 yards on the ground over Seattle’s final three regular-season games, averaging only 1.5 yards per carry.

Then Rawls did so much more than just break loose and shed his mediocre status against the Lions. He reintroduced the NFC side of the playoff bracket to a familiar and feared weapon: a Seahawks rushing offense eager to smack, stomp and score.

Forget about Rawls’ rushing total for a second, and we’ll get to that franchise record-setting number. What Rawls did in just the first half, as Brad Galli of WXYZ-TV Detroit noted, was already some serious trucking.

— Brad Galli (@BradGalli) January 8, 2017
Those first-half yards came on just 15 carries. Rawls also rumbled around to record 68 yards after contact in the first half alone, according to Louie Benjamin of Pro Football Focus.

By halftime, the main scoreboard showed a tight game with the Seahawks leading only 10-3. But another scoreboard foreshadowed what was to come, as Seattle led in rushing yardage 111-28 after only two quarters.

It became very clear, very early that the January version of the Seahawks had arrived on schedule. They’ve been to two straight Super Bowls by playing the sort of football that leaves physical and pride-related wounds. Their brand of playoff football is rooted in raw power and established through a run-oriented offense.

A rushing offense that paints defenders different shades of black and blue had been absent at times in Seattle during the regular season. But it was inconsistent due to injuries. Rawls missed time and was limited by multiple injuries, and fellow running back C.J. Prosise remains sidelined with a shoulder issue.

As a result, developing any sort of rhythm became difficult. The Seahawks averaged only 99.4 rushing yards per game, which was down dramatically from their 141.8 weekly average in 2015.

So where, exactly, had those power-obsessed Seahawks gone? Nowhere, apparently.

Rawls spearheaded the pummeling on Saturday with his quick, decisive cuts and running style that can be both seen and heard. It seems like nothing in life can give him more joy than initiating the distinct thwack that shakes the ground when large bodies collide.

He set a Seahawks franchise playoff single-game record with his 161 rushing yards. He reached that mark while averaging 6.0 yards per carry, which is nearly three full yards more than his average throughout the regular season (3.2).

Rawls was central to everything the Seahawks did offensively. They didn’t need quarterback Russell Wilson much, or brilliance from their wide receivers. But Seattle received plenty from both anyway.

Wilson had thrown for only 105 passing yards through just over three quarters when he dropped back and looked toward the sideline and wide receiver Doug Baldwin. He hadn’t cooled off, and his ability to float a football into an incredibly narrow space deep downfield didn’t go anywhere.

Then Wilson launched a high-arcing rainbow that fell perfectly into Baldwin’s outstretched mitts for a game-altering 42-yard gain.

It was a one-score game at the time, and the Lions had already made regular-season history with their eight comeback wins in the fourth quarter or overtime. So Wilson answered when the Seahawks desperately needed some insurance and security. Rawls scored a four-yard touchdown four plays later.

Baldwin added a touchdown catch later in the fourth quarter when he joined the one-handed grab fun started by fellow receiver Paul Richardson and his Odell Beckham Jr. impression. Richardson made several leaping grabs and is rapidly rising as an athletic marvel.

All of those winning elements—the rushing dominance, the sprawling catches at crucial moments and Wilson’s precision—are the usual ingredients thrown in the mixing pot for Seahawks playoff success. And of course, the stonewalling defense that allowed single-digit points for the fifth time in 2016-17 is standard stuff too. Toss it all together, and the Seahawks are a terrifying playoff opponent.