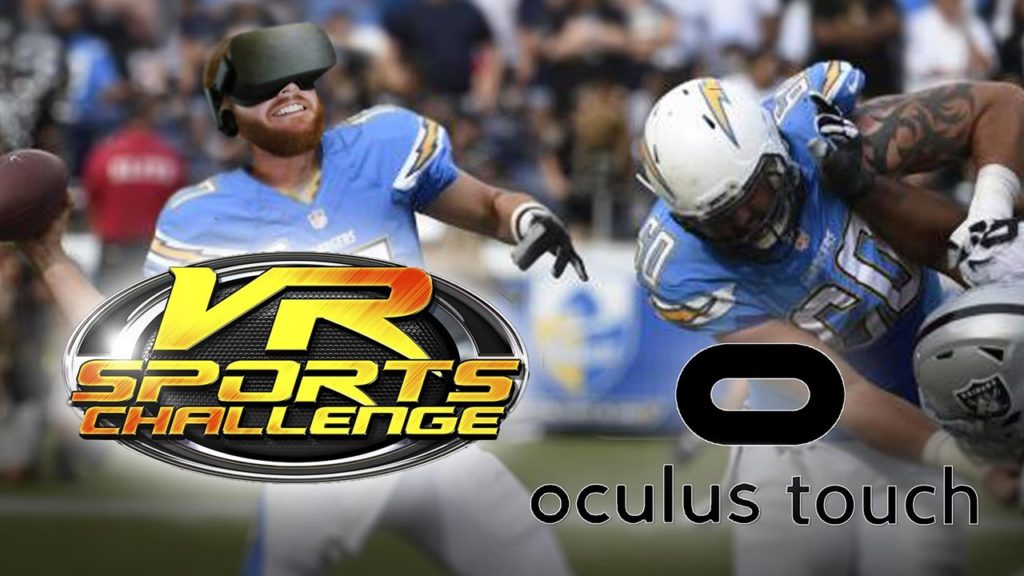 Gameplay from VR Sports Challenge, a virtual reality game for Oculus Touch where you play a quarterback.

It’s not exactly a NFL quarterback simulator, the game uses gaze look based targeting where you aim by moving a reticle with the Oculus Rift VR HMD. Then throw the ball by bringing your hand forward in a throwing motion with the Oculus Touch controller and releasing the shoulder buttons. You can also adjust plays and call snaps using the Oculus Touch VR motion controllers.

Live the mythical moments from your favorite sports that you’ve only dreamed about: call the plays and drive your team to the end zone as an all-pro quarterback, knock the ball out of the park as long ball slugger, drain threes from around the horn as a hot handed shooter, and lock down victory on the ice as an impenetrable goalie.

The innovative Touch Controllers deliver an unprecedented level of immersion as you effortlessly perform throws, catches, pitches, swings, passes, jumpers, dunks, slapshots, saves, and more! Stadiums filled with rabid fans will hang on your every move, ready to curse your name for eternity or cheer you directly into the immortal halls of victory.

In VR Sports Challenge, with everything on the line, the game truly is in your hands!”

If you want to see more virtual reality gameplay content, check out my channel. I put out VR gameplay videos for the Oculus Rift CV1 with Touch, the PSVR, and the HTC Vive VR HMDs. Please like and subscribe if you enjoy my content!