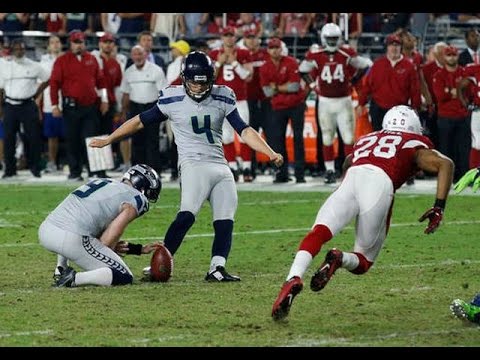 Arizona Cardinals and Seattle Seahawks both amazingly missed short field goals in overtime as they were forced to settle for an unlikely 6-6 tie on Sunday night.

Stephen Hauschka’s 27-yard field goal was wide left with seven seconds left for the Seahawks after Chandler Catanzaro’s 24-yarder bounced off the left upright for Arizona.

The tie was the Cardinals’ first since December 1986, a 10-10 draw at Philadelphia when the franchise was based in St. Louis. It was the first for the Seattle since entering the NFL in 1976.

The Cardinals (3-3-1) dominated the game statistically and looked to be in shape to win it after Carson Palmer’s 40-yard pass to J.J. Nelson set up Catanzaro’s short kick.

The Seahawks (4-1-1), stuffed throughout regulation by the Arizona defence, took over and Russell Wilson completed passes of 31 yards to Jermaine Kearse and 27 yards to Doug Baldwin to give Hauschka his short attempt, but he scuffed his lines.