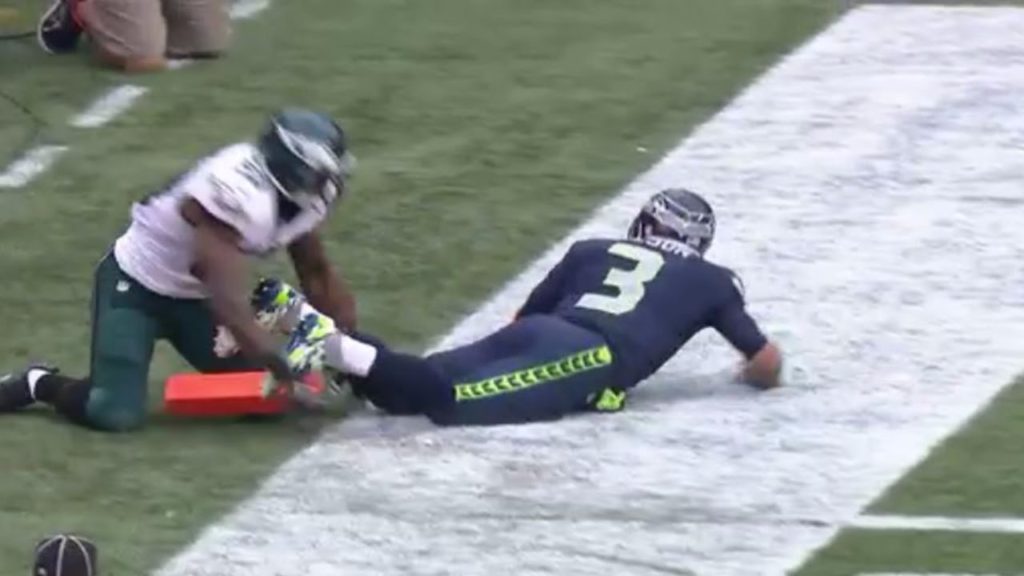 The Seattle Seahawks gained a season-high 439 yards on offense, jumped out to a big lead and didn’t look back on their way to a 26-15 win against the Philadelphia Eagles Sunday.

Seattle quarterback Russell Wilson completed 18-of-31 passes for 272 yards and a touchdown as the Seahawks pushed their record to 7-2-1 this season. Wilson’s touchdown pass was a 72-yard, catch-and-run throw to running back C.J. Prosise for the Seahawks first touchdown.

The Seahawks held the Eagles (5-5) to 308 yards of offense and limited rookie quarterback Carson Wentz to 218 yards passing in the game.

The Eagles cut the Seahawks to 26-15 after quarterback Carson Wentz threw a touchdown pass to wide receiver Dorial Green-Backham late in the fourth quarter.

A 35-yard field goal by Stephen Haushcka pushed the Seahawks lead to 26-7 early in the fourth quarter.

The Russell Wilson-to-Doug Baldwin combination continues to click after Wilson connected with Baldwin for a 15-yard touchdown to extend the Seahawks lead to 23-7 in the third quarter. Baldwin has caught four touchdown passes in the last two games.

The Seahawks extended their lead to 16-7 after a 21-yard field goal by Stephen Hausckha with 3:50 remaining. The big play was a 33-yard pass from quarterback Russell Wilson to wide receiver Tyler Lockett down to the Philadelphia 3.

It was vintage Russell Wilson on the Seahawks second touchdown. On a third–and-15 from the Eagles 35, Wilson scrambled to his left and found tight end Jimmy Graham at the Eagles 15. Graham broke a tackle and ran into the end zone for the touchdown to give the Seahawks a 13-7 lead with 8:20 remaining.

Philadelphia Eagles quarterback Carson Wentz threw a four-yard touchdown pass to tight end Zach Ertz and the Eagles took a 7-6 lead against the Seattle Seahawks early in the second quarter.

The Seattle Seahawks running back C.J. Prosise breaks out for a 72-yard touchdown run to give the Seahawks a 6-0 lead against the Philadelphia Eagles with 11:02 remaining. Prosise took the handoff up the middle, but cut to the outside and broke into the clear at the 40 and raced down the right sideline for the touchdown.

Prosise’s run was the longest play of the year for the Seahawks and the longest run ever in CenturyLin Field.

The Seahawks (6-2-1) gritted out a tough but season-defining win at New England, but they can’t afford a letdown against the Eagles. The offense is getting back on track now that quarterback Russell Wilson is getting healthy. The Seahawks are still looking for their running game to emerge, but the return of Thomas Rawls and emergence of rookie C.J. Prosise should help.

The Eagles (5-4) got a much-needed win against Atlanta to snap a two-game slide. The Eagles defense stifled the best offense in the NFL and the offense controlled the game with 208 yards on the ground.

Here’s everything you need to know to watch the game, or follow along as we bring you the latest score, live updates, photos and video highlights in the comments section below.