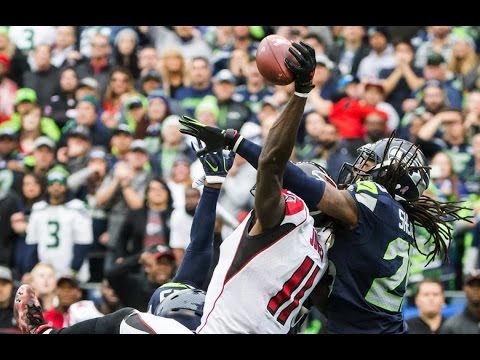 Seattle shouldn’t have needed an uncalled pass interference penalty on Richard Sherman to win Sunday’s game against the Falcons. Indeed, the game never should have been so close.

The Seahawks led 17-3 in the second half when Falcons receiver Julio Jones blew past Sherman for a touchdown. It appeared that a miscommunication occurred, with the defense in a “Cover 3” defense but Sherman not handling his third of the deep portion of the field.

Sherman wasn’t happy. To say the least. He confronted teammates and had to be calmed down by several others. When it didn’t work, a group of teammates gathered around him and began jumping and chanting in an effort to get him to calm down.

After the game, which the Seahawks won after officials didn’t flag Sherman for interfering with Jones, the home team downplayed the meltdown.

“I was just chillin’, hanging out,” Sherman said, via Larry Stone of the Seattle Times. “It’s frustrating to give up two bogus touchdowns.”

Coach Pete Carroll was asked whether the team can put Sherman’s outburst behind them.

“There is no doubt,” Carroll said, via Stone. “These guys have been through too much together, they care too much about one another. I’m not worried about it one bit. This is a bunch of guys that are here to do the right thing, and they’ll figure it out.”

Receiver Doug Baldwin was more pragmatic about his Seattle and Stanford teammate: “I’ve known him for 10 years. That was mild.”

Linebacker Bobby Wagner, who was in the middle of trying to calm Sherman down, understood the reaction.

“Emotions run high, and that’s like my brother, man,” Wagner said. “I just told him, I was mad on Monday and he calmed me down. I’m trying to return the favor. He’ll be good. He’ll be all good. He’ll forget about it tomorrow. We’re all good.”

They’re better because they won. If Sherman had been flagged for interference and the Seahawks had lost, it would have been a lot harder to put the incident behind them. Instead, they’re 4-1 and piling up victories, even if they haven’t been nearly as dominant this season as they’ve been in past years.

Thanks for watching
More videos please visit to https://goo.gl/tksv1Y