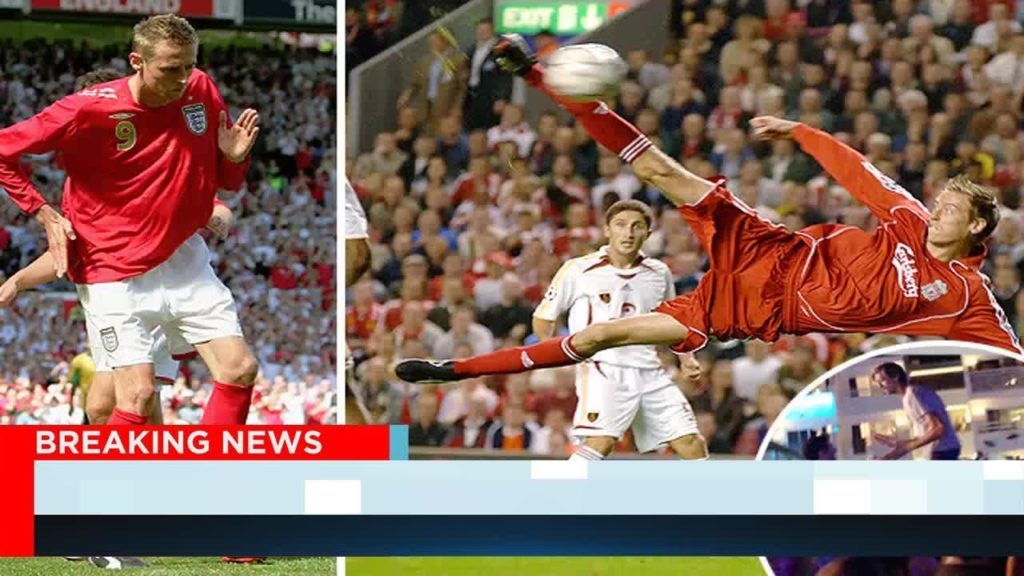 PETER CROUCH has announced he is retiring from football – and will do so as one of the funniest players to have ever graced the game.  The former England, Tottenham and Liverpool striker, 38, will hang up his gigantic boots after a career spanning 11 clubs in 20 years.  The 6ft 7ins forward, who is married to 33-year-old model Abbey Clancy, earned 42 caps for his country and said he’s had “the time of my life”.  On his retirement, Crouch claimed: “I have had 23 years to prepare for this moment but, now it is here, you realise nothing can prepare you at all.  “The time has come refer to myself as a ‘former footballer’; this incredible journey I have been on since I was 16 is over.  “My ambition was to play until I was 40, so it is scary saying the word ‘retirement’.  “It has left me emotional and it feels weird not to be preparing for a new campaign but circumstances over the last couple of seasons have made me realise that this is the right thing to do. “DREAMS COME TRUE”  “To go from being a regular starter to someone whose role is limited to ten or 15 minutes off the bench has been hard to accept.  “I will be 39 in January but I am physically fit and could have carried on. What I didn’t want to be was someone who was thrown on to have balls smashed up to them.”  Crouch emotionally added: “Football, simply, made my dreams come true.”  With the legend now calling time on his career, we take a look at just why he will go down as one of the most-loved players in the history of the beautiful game… KING OF THE ONE-LINER  CROUCH was once asked what he would be if he wasn’t a footballer.  Rather than answering with any world of professions – fireman, bus driver, toilet cleaner, anything – quick as a flash, he replied: “A virgin”. GRAB IBIZA THE ACTION  THESE days, footballers documenting their every move while on holiday is commonplace – we’re looking at you Jesse Lingard, Paul Pogba and Co…  But in the late 00s and early 2010s, that wasn’t so much the case.  In fact, one man above all stood out – and not just for his height – when he was snapped “dancing” in Ibiza.  …That is, is you can call frantically throwing your head around while wobbling around dancing.  Nevertheless, fans loved it. And they still do to this day. Iconic. THE ORIGINAL MR ROBOT  THE year is 2006 and England are preparing for yet another bleak World Cup campaign with a warm-up match against Jamaica.  The Three Lions run out 6-0 winners – and Crouchie scores a hat-trick. But how did he celebrate?  Not the traditional Alan Shearer, single arm raised above his head. Oh no…  Instead, Crouch celebrates by busting out a perfect “robot” routine with his lanky limbs.  The move went down in history, but he later refused to ever unleash his sweet moves again. Until, that is, he scored his 100th Premier League goal.  That day in 2017, while on the books of Stoke, fans rejoiced as yet another iconic moment of Crouch dancing made its spectacular return. HEAD OVER HEELS  OF course